The two-day visit by the Iranian regime’s 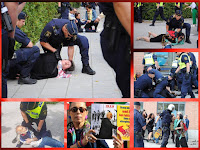 sanctioned foreign minister-Javad Zarif to Sweden on August 20 and 21, met with stormy protests of supporters of the Iranian opposition including by hundreds of Iranian women living in Sweden. Iranian protesters loudly spoke out against the regime’s human rights violations, murdering dissidents in Iran, and suppressing women, rights activists and religious minorities. They denounced Stockholm’s acceptance of the foreign minister of the mullahs’ terrorist regime and demanded his expulsion from Sweden.
“Zarif, get lost!” chanted Iranian protesters, and cried out, “Zarif is a murderer and enemy of all Iranians”; “Zarif is a murderer, talks with him are unacceptable”; “Zarif is a charlatan and enemy of the people of Iran”; “Zarif is a terrorist murderer”, etc.
The exiled Iranians supporting the Iranian Resistance, defend and echo the stifled voice of Iranian women and youth and many of them are survivors of families persecuted by the clerical regime. However, they were violently treated by the Swedish Police.
A number of women were among 50 Iranian protesters who were beaten up and arrested by the Police. They included prominent Iranian women’s rights activists, former political prisoners, and families of victims of the 1988 massacre.
The violent treatment of Iranian women and protesters by the Swedish Police took place while the foreign minister of the world’s top state-sponsor of terrorism was being treated as a guest at the Foreign Ministry building in Stockholm.
Zarif was further given a forum at the Stockholm International Peace Research Institute (SIPRI) where he threatened the world with “unpredictability” in response to “unpredictable” U.S. policies.
Zarif threatened Iranian protesters at the Stockholm International Peace Research Institude which was aired live by the state-run Iranian PressTV pointing to the people outside the building and said: “they would not stay alive for a minute,” if they are caught by the regime’s agents.
The vehement protests by supporters of the Iranian Resistance in Stockholm caused cancellation of a joint press conference by Zarif and the Swedish Foreign Minister, Margot Wallström. Under fire, Ms. Wallström tried to justify her meeting with Javad Zarif and said that Sweden didn't invite Zarif and he came on his own. Javad Zarif, Iranian regime's Foreign Minister was sanctioned three weeks ago by the US Department of Treasury as the key enabler of the Iranian regime’s policies in the region and the world. The US State Department called him the chief apologist of the regime, who is “just as complicit in the regime’s outlaw behavior as the rest of Khamenei’s mafia.”

The trial of Marzieh Amiri, Journalist and activist who was arrested

during May day in Iran, was held in Tehran on August 13, presided by the notorious Sharia judge, Mohammad Moghiseh. She was sentenced to 10 years and 6 months in prison and 147 lashes.
Marzieh Amiri suffered from epileptic seizures at the time of interrogation due to physical and psychological pressures. But Moghiseh opposed her bail and temporary release for medical treatment.
Earlier, Nasrin Javadi (Azam Khezri), a female labor activist who was arrested on International Labor Day in Tehran, was sentenced to 7 years in prison and 74 lashes. Other female labor activists currently in prison include Neda Naji, Atefeh Rangriz, Anisha Assadollahi, Sanaz Allahyari, Sepideh Qolian, and Asal Mohammadi.
In other news, the hearing on the charges against Parvin Mohammadi, the Vice President of the Free Union of Iran Workers, was held in the Karaj Court on Saturday, August 24, 2019. Ms. Mohammadi was arrested by security forces at a ceremony on the occasion of International Labor Day held in Jahan Nama Park located on Tehran-Karaj Highway on April 26, 2019. Parvin Mohammadi is accused of propaganda against the regime.

Ms. Farangis Mazloum, the mother of political prisoner Soheil Arabi, has been on hunger strike since August 16. She was being held in a poor physical condition in the solitary confinement in Ward 209 of Evin Prison. she has a history of heart problems. She was arrested on July 22. Prison authorities have also issued a 300 million toman bail for her release, which her family cannot afford.
- Ms. Shahla Jahanbin, the wife of writer and civil activist Abbas Vahedian Shahroodi in Mashhad, was arrested by security forces on August 21, and taken to an unknown location. Five Ministry of Intelligence agents arrested Ms. Shahla Jahanbin at her home while searching the house and seizing two mobile phones belonging to Ms. Jahanbin. Mr. Abbas Vahedian Shahroodi was arrested by security forces on Sunday, August 18, 2019. The reason for Ms. Shahla Jahanbin’s arrest is unknown.
Abbas Vahedian Shahroodi, 49, was previously arrested at his home in Mashhad by the Ministry of Intelligence agents last October and transferred to an unknown location and was eventually released as a result of his daughter’s activities. 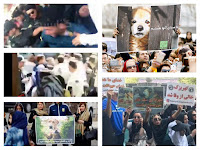 On Monday Aug. 19 a group of animal-right activists protested in front of Tehran's Mayor's office the cruel treatment of dogs by the employees of this office. The city employees injected dogs in Kahrizak township with acid through their hearts. The regime's forces attacked this protest with batons and pepper spray.