The bill for ‘Provision of Security for Women (PSW)’ will not be adopted in Iran regime’s parliament after all. This bill has been stalled for 9 years in the labyrinths of decision making in the parliament. The bill has been passed around among various departments of the government and after ultimately removing any executive function, has remained to be examined in Hassan Rouhani Administration.
Fatemeh Zolghadr, Spokeswoman for the Cultural Commission in the parliament echoed Parvaneh Salahshouri’s statements about the latest situation on the PSW and said, “The bill has been sent from the judiciary and returned to the government, but we do not know why it has remained silent in the government.” She also added, “A month ago, at a meeting with Masoumeh Ebtekar, the issue was raised that the bill was being considered by the state commission to make the final amendments, but so far nothing has been reported and it is unlikely it will reach the parliament this year.” (The state-run Rokna News Agency – December 27, 2019)
It should be noted that the 11th National Consultative Assembly (Majlis) will have elections next June. At a meeting on September 18, 2018, to review the bill for Provision of Security for Women, Parvaneh Salahshouri, a member of mullahs’ parliament, said, “The bill initially called, ‘Elimination of Violence Against Women’, was first renamed as Provision of Security for Women. For two and a half years, the bill has been supposed to come back to the parliament, but the bill has got stuck in a labyrinth incomparable to any other bill or plan.” (The state-run IRNA news agency – September 18, 2018) Parastoo Sarmadi, a regime expert on the issue, said, “Iran has one of the highest statistics on violence against women, and this makes adoption of the bill for Provision of Security for Women even more urgent.” (The state-run ILNA news agency – September 18, 2018)
The main and most violent forms of violence against women are perpetrated by government officials in Iran. Iran is also the only country in the world where thousands of women have been executed or murdered under torture for their opposition against the regime. During the nationwide uprising in November 2019, 400 women were among those killed. The exact number of women arrested during the uprising is still unknown.

Political prisoner, Atena Daemi a child rights activist was transferred to solitary confinement on Saturday, December 28. On his twitter account, Atena Daemi’s father, Hossien Daemi tweeted about the transfer of his daughter to solitary confinement and wrote, “Atena’s condition is dire and her doctor has requested immediate and emergency hospitalization. Instead of the hospital, they transferred my daughter to solitary confinement.”
Ensiyeh Daemi, Atena Daemi’s sister also tweeted, “We did not have a call from prison and after visiting prison no one, neither the head of prison nor the prosecutor, was accountable, and declined to comment. There have been reports that Atena has been transferred to Ward 2A of the IRGC intelligence detention center. For us, the reason for Atena’s transfer and how she was transferred is unclear and worrying.”

Soha Mortezaii another political prisoner went on a hunger strike. In a telephone call to her family, Soha Mortezaii explained the injustice concerns in her case and in a letter to the Prosecutor’s Office in Evin Prison she wrote: “When a prisoner like me can not secure bail, you have to release me on a pledge. What I am seeing now is the injustice and discrimination that I have been imprisoned for. Since I cannot afford the bail, I have to stay in prison. In protest of this unfair process, I will go on hunger strike until the assignment is made.”
Student activist Soha Mortezaii was arrested during the December uprising along with a number of other students and later sentenced to six years in prison.


******
Civil activist Nosrat Beheshti, a retired teacher in Mashhad, was arrested by Ministry of Intelligence agents at her home on December 24, and transferred to an unknown location. Her family’s follow-up and referral to judiciary and security agencies to learn the reason for her arrest and whereabouts have so far failed.

Political prisoner Narges Mohammadi was sent to exile to the Prison of Zanjan. From Zanjan Prison, she wrote, “I would not give up crying out against oppression.” Her husband, Taqi Rahmani, who lives abroad,  tweeted that political prisoner Narges Mohammadi had been transferred from Evin Prison to exile in Zanjan Prison in the morning of Wednesday, December 25, 2019, without a verdict, by force and physical violence.
The Warden of Evin Prison had smashed her several times to the wall and in the course of the wrangling with guards, she was injured and her arms started bleeding. Prison authorities had earlier deprived this prisoner from visits and telephone calls due to her sit-in protest.
Political prisoner Narges Mohammadi had earlier written a letter denouncing the regime’s use of force against protesters in Iran and calling on everyone to take a stand for the prosecution of those responsible.
In her letter on December 1, 2019, she pointed to the situation of two of those arrested during the protests in November 2019. She wrote about a wounded young protester who had been taken to Evin Prison. “His appearance showed that bleeding, infection and swelling of his feet had overwhelmed him and that was why the interrogators of Ward 209 of Evin had brought him from solitary cell to the clinic. He was very young from Islamshahr. I told him to insist on being treated for his leg otherwise it would be amputated. He said, ‘I’m going to be executed. What’s the difference with leg or without it? They have not even put Betadine on my wound since the day they arrested me.”
Political prisoner Nargess Mohammadi also wrote about a young woman only 20 years old. She said, “The interrogator had caught her hair and dragged her around. Insulting her with very vile language, such that she couldn’t repeat his words. Then he had opened his belt and banged it on the chair and table to frighten the young woman and have her say whatever they wanted in front of the camera. Not once, but several times.”

Elimination of death penalty for juveniles under 18 is not on the Iranian regime’s agenda. On December 25, the women’s fraction in the Iranian parliament discussed the issue of elimination of death penalty for juveniles under 18 years of age. The Deputy of Legal Affairs of Parliament in the Ministry of Justice confessed to the execution of children under 18 years of age and said, “We are not considering the elimination of death penalty for juveniles!” “We still face executions of children under the age of 18,” said Tayebeh Siavoshi, who heads the legal committee for the women’s fraction of the Majlis.
Another official, Amiri, admitted to the shocking statistics of these executions and said, “Since 2017 until now, 15 children have been executed, and at present, we have between 6 to 7 cases of children on death row.” (The state-run Khaneh Melat Website – December 25, 2019)
The executions of women and girls under the age of 18 continue in the regime’s prisons. Women victims of executions in Iran are primarily victims of poverty and the mullahs’ misogynist laws regarding early and forced marriages.
Fatemeh R. was a 21-year-old woman who was executed around December 9, 2019, on the charge of killing her husband. (The state-run T. news.ir, December 16, 2019) She was a minor, only 17 at the time of committing the crime.
Zeinab Sekaanvand was executed on October 2018, in the Central Prison of Urmia. She was only 24 at the time of execution. Zeinab Sekaanvand had been forced into marriage at the age of 15. She lived two painful years, being battered everyday by her husband. She was arrested on the charge of killing him at age 17 and eventually executed in 2018.
The clerical regime in Iran is the world’s top per capita executioner. The Iranian Resistance calls for the abolition of the death penalty, particularly the executions of minors and children under the age of 18. 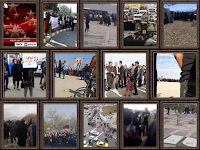 A group of retirees held a protest in Tehran-Iran outside the parliament and commemorating the martyrs of the November uprising by holding up their pictures.
A group of retirees held a protest gathering and held up the photos of martyrs of the Iran uprising, including young women Nikta Esfandani and Mahnaz Mehdizadeh, on Monday, December 23, 2019. They said they were there to demand their plundered rights, to convey the demands of the innocent to those who do not hear or see the oppression of plundered people.
A group of retirees commemorate martyrs of Iran protests in Tehran
They declared in their gathering that they join the nationwide uprising of the people of Iran. They chanted, “death to the dictator,” “dictator, shame on you, leave our country alone.”
The retirees reiterated that they will continue their protests and will not surrender to security forces until their demands were met.
The spokesman for this gathering said, “We cry out in the streets. We do not beg you. We want our right. You, the government, you owe us. We have worked and toiled in this country for 30 years… Your security forces punch teachers and (elderly) fathers in the chest.”
Also on Monday, December 23, the defrauded investors of the IRGC- (Islamic Revolutianary Gaurd Corps)backed Caspian financial institute, and Tehran’s Arman, held a gathering outside the Judiciary building to express their protest to the plunder of their properties and wealth. 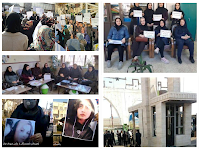 On Monday, December 23, teachers held a nationwide sit-in protest in many cities of Iran to express support and solidarity with the retirees and complain about their own livelihood. They demanded the release of political prisoners, and called for free and fair education for all.