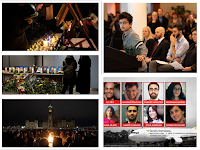 Students and community members attend a ceremony at Ottawa Carleton University to honour biology PhD student Fareed Arastech and biology alumnus Mansour Pourjam, who died in the downing of the Ukraine International Airlines Flight PS752 by IRGC Islamic Revolutionary Guard Corps in Tehran, in Ottawa, on Wednesday, Jan. 15. Similar ceremony was held for the Ottawa students in OttawaU. Also outside the Parliament a memorial was held to commemorate the victims of the Ukrainian airplane. PM Justine Trudeau attended this ceremony as well.
Friends say Mehraban Badiei was one of the kindest people they had ever known, originally from Tehran, she had gone to school in Toronto before moving to become a student at University of Ottawa.
Mansour Pourjam, a biology alumnus from Carleton University, was among the passengers on the plane. Flags on Carleton's campus were lowered to half-mast.
Cartleton University Biology PhD student Fareed Arasteh's life was lost in the tragic plane crash in Iran.
Roja Azadian, who had travelled to Iran with her husband, was also killed in the crash. Her husband couldn't board the return flight due to a ticket mix-up, so she went ahead alone, friends said. He remains in Tehran.
Roja Azadian's husband Mohsen was a graduate of Algonquin College, had a new job here, the plan was to bring his wife to Canada, for a better life. Because of an issue with his ticket, Mohsen was not able to get on the flight, but sent Rouja ahead, telling her, he would get on the next flight and meet her in Ottawa. Sadly that was the last time he spoke to her. University of Ottawa PhD student Alma Oladi was among the victims of Wednesday's plane crash in Tehran.
The names of Ottawa victims are: Farid Arasteh, Mansour Pourjam, Mehraban Badiei, Fereshteh Maleki, Roja Azadian, Saeed Kashani, Alma Owladi, Ali Pey.

Iran's 105th and the second woman executed in the year 2020, is identified as Maliheh Haji Hassani on Jan. 14. She was imprisoned in central prison of Shiraz allegedly for killing her fiance since 2016. She was 29 years old.
The first woman who was executed in 2020 was Sara M. in Mashhad Prison. She was executed after spending three years in prison on death row. The official state media have not announced the exact date of the execution. In 2019, the Iranian regime hanged 16 women in tandem with increasing suppression and executions in Iran. In the three weeks of December 2019 alone, six women were executed by the regime in various Iranian prisons.
Iran holds the world’s record of top executioner of women. As a consequence of the clerical regime’s failure to categorize deliberate murders according to their degrees, anyone committing murder is sentenced to death, regardless of their motives. Many of the women convicted of murder in Iran are themselves victims of violence against women and have committed murder in self-defense. The trials and sentences issued are grossly unfair.
Many women are currently awaiting execution in prison. Some of these women are being held in Qarchak Prison on the death row. These women are mostly mothers and have several children.

Shora Fekri, a former student activist was arrested in Amol on Wednesday, January 12, 2020, for attending a memorial service for the Ukrainian plane crash victims. About 4 days have passed since her arrest, but her whereabouts are still unknown. Shora Fekri, who holds an MA in economy from University of Mazandaran, is a professional poet and mountain climber. She is one of the few women working in Iran in high altitude and doing various restoration works in Mazandaran province.
In other development, in response to the official ISNA reporter’s question on arrests during the protests over the Ukrainian plane crash, the spokesperson for the clerical regime’s judiciary said, “We do not hold back if there are attempts against security. About 30 people were arrested in this event. The arrests have been made when crimes were witnessed.” (The state-run ISNA news agency – January 14, 2020) 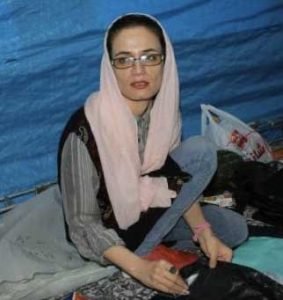 In other news, Maryam Payab, a civil activist from Behbahan, was temporarily released from Sepidar Prison in Ahvaz on January 13, 2020, on a 1 billion toman (87,000 USD) bail until the end of her hearing. This bail is unprecedented even in the ranks of the regime’s judicial extortion of political prisoners.
Maryam Payab was shot in the back on November 16, 2019. She was operated on in a hospital in Behbahan, Khuzestan, and released after three days, but was arrested on December 19, 2019, and taken to Sepidar Prison in Ahvaz.
Vida Rabbani, a civil activist, was arrested by security forces at her home on January 15, 2020.