According to prisoners recently released from Qarchak Prison, women with contagious diseases are held in the general wards. More than 130 women detained in Qarchak Prison suffer from AIDs and Hepatitis, but they are held in various wards among other prisoners. There are also six prisoners suffering from scabies who are held with other prisoners, instead of being kept in the quarantine.
Prison authorities fail to separate sick prisoners
Prisoners have time and again asked prison authorities to detain prisoners suffering from contagious diseases in a separate section.
Scabies is a very contagious disease which could be transferred by shaking hands, using a contaminated sheet, or even touching the clothes of the contaminated prisoner. But prison authorities have told prisoners that scabies is not contagious!
Qarchak Prison authorities have closed down the quarantine ward. As a result, new prisoners directly enter the wards without being tested for AIDs, Hepatitis, and other contagious diseases. Even if they are tested, they are admitted into the general wards regardless of their positive or negative results. Despite prisoners’ warnings to prison authorities including Mehdi Mohammadi, the warden of Qarchak, and other officers in charge like Sakineh Shah Cheraqi, Zahra Mirzaii, and Maryam Mirzaii, they have not taken any action to separate the sick prisoners from others.
Imprisoned mothers
One of the most tragic conditions is that of mothers who have their children imprisoned with them. Lack of access to suitable clothes for children and unsanitary conditions of the wards are only a small part of the problems mothers face in prison. In February 2019, prison guards raided these prisoners. As they used tear and pepper gas against the inmates, a 20-day infant who was staying with his mother in prison, died.

Three women’s rights activists Yasaman Aryani, Monireh Arabshahi and Mojgan Keshavarz were sentenced to more than 31 years in prison. Yasaman Aryani and Monireh Arabshahi both were sentenced to 9 years and 7 months and Mojgan Keshvarz was sentenced to 12 years and 7 months imprisonment. Attorneys were not allowed to enter the court in the first instance and at the appeal. The regime court also refused to receive a defense bill from the three women’s rights activists. Earlier, in August, the initial sentences of these three women’s rights activists totaled 55 years, which triggered widespread international condemnation.
Civil rights activist Narges Mansouri, a member of the Workers Syndicate of Tehran and Suburbs Bus Company, was sentenced to 6 years in prison and two years’ ban on membership in political parties at Tehran’s Revolutionary Court presided by Sharia Judge Iman Afshari. Narges Mansouri’s salary has been cut off despite more than 25 years of work experience at Tehran’s Bus Company. Narges Mansouri was arrested on August 11, 2019 and went under interrogation at the IRGC Detention Center.
On the fifth day of her arrest, she went on a hunger strike to protest to the interrogators’ insulting and pressuring her under interrogation, and not allowing her to call her 12-year-old daughter.
She was on a hunger strike from August 16 to September 22, 2019 and ended her strike after being transferred to the women’s ward of Evin Prison.
Narges Mansouri was released from Evin Prison on November 13, on a 500 million toman bail.

Firouzeh Shafizadeh, a Baha'i pharmacist in the Khotbeh sara village in Iran's Gilan province was arrested at her home in this village on January 25. Firouzeh Shafizadeh, with a Ph.D. in Pharmacology, had many opportunities to work in foreign countries, but moved from Karaj to this village two months ago (November 2019) to work in the countryside and help disadvantaged people. She was arrested only because of her religious beliefs, and security agents arrested her on charges of “propaganda against the state.” She has been in jail for more than ten days but has not been allowed to visit her lawyer. The prosecutor has refused to grant her temporary release on bail.

Civil activist Rezvaneh Ahmad Khanbeigi was sentenced to an additional six years in prison on Sunday, February 2. Rezvaneh's trial had been held a day earlier on Saturday, February 1, at the Revolutionary Court of Tehran presided by notorious Judge Amouzadeh to examine the charges leveled against her by the Intelligence Department of the Islamic Revolutionary Guard Corps (IRGC).
For taking part in the protests against fuel price hike in November 2019,  Rezvaneh has been accused of “collusion and association against national and international security” and “propaganda against the state.”
Earlier, civil activist Rezvaneh Ahmad Khanbeigi had been sentenced to 4 years and five months’ imprisonment by Branch 26 of Tehran’s Revolutionary Court presided by Judge Iman Afshari, for “collusion and assembly against national security” and “propaganda against the state.” The verdict was upheld by the Revision Court.
Rezvaneh Ahmad Khanbeigi had been detained in the IRGC Ward 2A in Evin from November 17 to December 12, 2019. Then, she was transferred to the Women’s Ward of Evin Prison.

Born in 1990, Ms. Ahmad Khanbeigi suffers from epilepsy and other nervous illnesses and needs special medications. Her family are concerned about her situation.
Kurdish civil activist Farzaneh Jalali has been sentenced to one year in jail by the Revolutionary Court of Kermanshah on the charge of “propaganda against the state. Her trial had was held on November 15, 2019. Ms. Jalali is a graduate of anthropology from the University of Tehran. Despite winning the sixth rank in the post-graduate admission test, she was deprived of continuing her education. Farzaneh Jalali has been active in the fields of children’s rights and women’s rights.
Jhaka Esma’ili, another Kurdish civil activist from Boukan, was also taken to jail to serve her three-month sentence on Wednesday, January 29.

The home of Moloud Hajizadeh, a journalist and women’s rights activist, was raided by IRGC intelligence agents on Monday, February 3rd. Upon completion of searching her house, IRGC agents told Moloud Hajizadeh to report in for investigations, the date and place of which will be announced later. The journalist was sentenced to 2 years’ imprisonment and a fine of 4 million tomans by the Tehran Revolutionary Court’s Branch 26 on charges of propaganda against the state and disturbing public opinion.
She was also detained and transferred to Evin Prison on July 15, 2019, after being referred to the Tehran Intelligence Prosecutor’s Office for her latest defense and bail hearing. After her charges were declared, she was temporarily released until the end of her prosecution on a 250-million-toman bail on July 16, 2019.
The Iranian regime has various oppressive organs making arbitrary arrests. The various organs consist of the State Security Force (police), the IRGC, the Bassij, even the disciplinary committees of the universities, etc. They have formed a network to impede the freedom of opinion, expression and assembly. 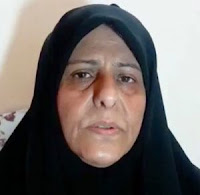 The regime had assured nurses – the majority of whom are women – that they would be paid in full by the end of the year. However, as 2019 drew to a close, that promise went unfulfilled.
In the past few years, the regime has repeatedly agreed to pay nurses’ salaries in full and on time. The nurses were also promised increased employment opportunities. Thus far, the regime’s assurances have failed to yield any concrete results. On the contrary, nurses across the country continue to be at the forefront of the health system, yet they are forced to cope with the challenges and constraints in Iran’s weak patient treatment system. (The state-run Salamatnew.com– February 1, 2020)
Saeed Deh Namaki, the Minister of Health, had agreed to fulfill the regime’s promises to the nursing community. He also said the government would “bring nurses’ demands to zero by the end of this year.” (The state-run Salamatnew.com – February 1, 2020)
In November 2019, Mohammad Mirzabeigi, head of the Nursing Organization, spoke about the chronic delays in paying nurses’ salaries. He added, “There is no reason for nurses to lose overtime pay in exchange for receiving their salaries.” He added, “In some parts of the country, [the regime] has delayed overtime pay by as many as six months. In other areas, [they have delayed] up to one-third of overtime payments.”
Previously, in July 2019, a member of the parliamentary Health Commission had acknowledged the problem. He stated, “Nurses have not received payment for several months. They are increasingly frustrated.” (The state-run Iran-Estekhdam website – July 14, 2019)
In addition to the regime’s failure to pay nurses’ salaries, Mirzabeigi admitted that “Nursing shortages are among the main problems in the country’s health system right now. We have not hired any new nurses in about two years.” (The state-run ISNA news agency – November 16, 2019)
In Iran, under the mullahs’ regime, the health system clearly fails to provide essential services – to nurses and patients alike.

Parisa Farshidi, an Iranian female Taekwondo belt, has applied for asylum in Germany. She is an Asian Games runner-up and Bronze medalist. Born in 1990, Farshidi is a fitness trainer, with expertise in CrossFit and TRX. In the 2010 Asian Games, Parisa Farshidi earned a Silver medal in the 67-kilogram welterweight.
Another six female athletes have recently sought refuge in other countries.
Kimia Alizadeh, also a Taekwondo champion, was the first and only Iranian Olympic medalist in women’s sports. She applied for asylum in Germany in November 2019.
In an open letter on her reasons for fleeing Iran, Kimia wrote, “Let me finally introduce my previously censored identity. I’m one of the millions of oppressed women in Iran. I had to wear whatever I was told to wear; I had to say whatever I was told to say. They [the regime] even claimed my medals and victories were because of their oppressive dress code and hijab. They attributed my successes to their management and tact.”
The regime’s sports federation has demonstrated its utter inadequacy in the field of women’s sports, offering virtually no support to female athletes and champions. Female athletes reach championship levels, both in Iran and around the globe, as a result of their individual efforts. They receive no financial support whatsoever from public institutions.
Mitra Hejazipour, a chess Grandmaster, is another example. Iran’s Chess Federation expelled her from the National Chess Team on January 2, 2020, for removing her headscarf during the World Chess Championship.
Sara Khadem-o Shari’eh (Sara Khadem), an Iranian chess player who holds both titles of International Master and Woman Grandmaster, posted on Instagram on January 12, 2020 that she would no longer be willing to represent the Iranian chess federation at international competitions.
Sara Khadem-o Shari’eh is the world’s No. 13 chess player.
These female athletes and medalists – national treasures of Iran – are clear examples of the brain drain that occurs under repressive regimes.