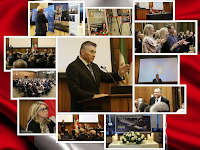 On Tues. Feb. 25th, the Canadian lawmakers showed their support for the Iranian Resistance and its cause of a free Iran. An event was held at the Sir. John McDonald’s building in the Canadian Parliament on Tuesday, on the initiative of Members of Parliament from Canada. The event was titled: “Iran: Human Rights, uprisings and West’s political options.” This event was attended by dozens of Canadian Senators, MPs, and renowned American politicians, as well as the supporters of the People’s Mojahedin Organization of Iran (PMOI, Mujahedin-e Khalq or MEK) and the National Council of Resistance of Iran (NCRI). The participants of this event paid tribute to the victims of the Ukrainian passenger jet, shot down by the Iranian regime’s Revolutionary Guards (IRGC); and over 1500 martyrs of the nationwide Iran protests. The meeting was held at the invitation of the Liberal Party MP Judy Sgro and Conservative MP James Bezan in cooperation with the Canadian Committee of Friends of a Democratic Iran. Former US Democratic Senator Robert Torricelli and Ambassador Lincoln Bloomfield, former US Assistant Secretary of State for Political-Military Affairs, were among the participants of this event. They called on Prime Minister Justin Trudeau to take a firm policy towards the Iranian regime. 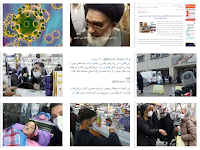 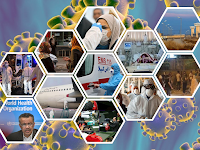 On February 29, the People's Mojahedin Organization of Iran (PMOI /MEK) announced that as of February 29, the death toll for the COVID-19 Coronavirus has exceeded 500. Meanwhile, the Iranian regime is making every effort to prevent the disclosure of the actual number of the victims. PMOI/MEK added that at least 150 victims have died in Qom, 100 in Tehran, 100 in Mazandaran Province, 37 in Arak and Saveh, 37 in Isfahan, Homayounshahr and Najafabad, 24 in Kashan and 22 in Gilan. In addition, several more people have died in Mashhad, Kermanshah, Karaj, Semnan, Bandar Abbas, Yazd, Ilam, Yasuj, Khorramabad, Neyshabour, and Hamada. The spokesman of the health ministery put the death toll at 54 and the number of those contracting the virus at 978. Maryam Rajavi the president-elect of the National Council of Resistance of Iran NCRI saild: Ali Khamenei, Hassan Rouhani, other regime leaders and IRGC commanders are responsible for the unprecedented outbreak of COVID-19 and the deaths of hundreds of Iranians. They prevent the disclosure of the actual death toll and the number of those contracting the virus. Observers from the World Health Organization must go to Iran and supervise all the medical centers and quarantines to prevent the spread of the catastrophe in the country. 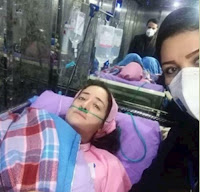 Narjes Khanalizadeh, 25 a nurse and the first medical staff, died at Milad Hospital of Lahijan on Tuesday, February 25, 2020 due to Corona infection.
One of the authorities of Milad Hospital said Narges Khanalizadeh had died due to flu, but she had died due to Corona infection and lack of the necessary equipment for physicians and nurses in the hospital. (The state-run Fars news agency – February 25, 2020)
On the deaths of the two other women, the president of the Medical Sciences University of Saveh, Abbas Nikravesh, told the state-run ISNA news agency that the first case belonged to an 82-year-old woman who had a heart condition, kidney condition and a chronic blood disease. She had referred to Modarress Hospital with acute respiratory symptoms and fever, and died after one day.
The second case was an 87-year-odl woman who had heart, lung, liver and kidney problems. She also referred to Chamran Hospital with acute respiratory problems. She died after two days of being hospitalized. (The state-run ISNA news agency – February 25, 2020)
One of the students of Khajeh Nasir University of Tehran has also contracted the virus and is currently quarantined. (The state-run ISNA news agency – February 25, 2020)
Local sources in Karaj reported of the death of a young woman, 17, due to Corona infection. Two others died in Khorramabad, one in Kermanshah, and seven in Gilan Province. 18 persons have died due to Corona infection in various hospitals in Isfahan. Eight people have contracted the disease in Kashan and one has died.
The head of the Medical Sciences University of Neyshabour said on Monday, February 24, 2020 that a 70-year-old patient had died in that city due to Corona infection. (The state-run ILNA news agency – February 24, 2020)
The highest death toll after China
Death of a nurse and two other women due to Corona infection
Iran has the highest death toll due to Corona infection after China.
In less than 24 hours, the number of provinces affected by the virus increased from 7 to 13. Health Ministry officials say 916 persons have been identified as suspected of carrying the virus. The Minister of Health, Kianoush Jahanpour, said 95 persons have tested positive and 15 have so far died in Iran. (the official IRNA news agency – February 25, 2020)
This is while Ahmad Amirabadi Farahani, member of parliament from Qom and member of the board of directors of the parliament, disclosed on Monday, February 24, 2020 that at least 50 persons had died in recent weeks in Qom due to infection with the Coronavirus, Covid-19. (The state-run ILNA news agency – February 24, 2020)
The trip by a delegation from the World Health Organization who were supposed to arrive in Tehran on Tuesday, February 25, 2020 was postponed. The WHO observer teams visit all countries to make sure they have all the necessary facilities to fight the spread of the Coronavirus.
The regime’s concealment and lack of transparency on the spread of the Coronavirus and the officials’ failure to provide the necessary equipment, masks and disinfectants has outraged the public.
In Talesh, hundreds of youths held a protest and clashed with the State Security Force.
Students of the Velayat University of Iranshahr also protested the arrival of two mullahs in their city.
In Bushehr, students of the Persian Gulf University held a gathering and called for the shutdown of their school.
Le Monde wrote, “Obvious mismanagement of the Coronavirus crisis by a regime which has been largely discredited among their people in recent months, has been a major contributor to a new crisis with regards to the people’s lack of trust in Iran.”

The Sports Federation of Iran has framed Iranian female ice climber, Zeinab Kobra Moussavi, forcing her to part with her profession in the championships.
Iranian ice climber Moussavi, the silver medalist at the Asian Championships, is one of the top 10 ice climbers in Iran and the world and is currently known as one of the best ice climbers in the world. She pointed to the obstacles she faced, including her lack of support from the Sports Federation of Iran and its gendered and masculine viewpoints.
Regarding her departure, Mosavi said that the lack of support from the Iran Mountaineering and Sport Climbing Federation, the lack of a dedicated gym for the sport, as well as the federation’s efforts to prevent her independent trips to international competitions are the most important factors of parting from her profession.
Zeinab Kobra Mosavi said, “I started 2020 with a lot of energy and hope to be the first Iranian woman to embark on the global ice climbing platform. There were only two other contests and tournaments left for me to reach the global level, but the federation did not allow me to leave. They didn’t even let me go to the tournament independently. All the times and days I spent practicing without a coach was in vain.”
This ice climber described the latest attempt by the Sports Federation to remove her and said, “They invited me to the federation, and I found out that they had filed a disciplinary case for me. I think there’s nothing worse than filing a case for a professional athlete.”
Zeinab Kobra Mosavi, began gymnastics when she was 6-years old. She completed her studies in theology and began ice climbing professionally.
In recent months, athletes such as Iranian chess Grandmaster, Mitra Hejazipour; Kimia Alizadeh, the first Taekwondo Olympic medalist; Iranian female boxer, Sadaf Khadem; and Dorsa Derakhshani, chess Grandmaster and International Master, have been forced into leave Iran because of the misogynistic policies of the Iranian regime.

Mojgan Eskandari who had been arrested and detained for participating in the November uprising, was sentenced to three years in prison. Mojgan was arrested on December 10, 2019 for participating in the protests in November. She was informed of her verdict on February 19, 2020 after completion of her trial stages by the Revolutionary Court of Tehran.
Mojgan Eskandari was held in the detention center of one of the intelligence agencies in Tehran after being arrested until the end of her interrogations. She was subsequently transferred to Qarchak Prison of Varamin on the charge of assembly and collusion against national security.
Born in 1968, Ms. Eskandari is currently detained in ward 1 of the Qarchak Prison known as the mothers’ ward.
Another political prisoner, Samira Hadian, who had been arrested on November 21, 2019 was sentenced to eight years’ imprisonment by the Revolutionary Court of Tehran presided by Sharia Judge Iman Afshari. She is currently incarcerated in Ward 1 of Qarchak Prison in Varamin.
In other news, civil activist Hakimeh Ahmadi was sentenced to 16 months in prison by the Court of Maraqeh. Hakimeh Ahmadi was arrested by security forces at her home in late October 2018.
On October 30, 2018, she was taken to hospital for broken ribs and fingers after being brutalized in the detention center. Three days later, on November 2, 2018, she was returned to the detention center of the Intelligence Department of Marand. She is currently held in the Prison of Maraqeh.
Also, cultural activist Parisa Seifi who had been imprisoned under undetermined status in Sanandaj Prison since November 2019, was released after several days of hunger strike.
During her time in detention, she was under pressure from security forces to make false confessions, so she went on a hunger strike.
Parisa Seifi was temporarily released on February 23, 2020, on a bail bond of 300 million tomans.

The Iranian Resistance released the names of 31 more protesters killed during Iran protests in November 2019. Among these is Vina Houshangi from Javanroud and a 3 year old child named Hosna Bameri. Hosna was shot and killed when she was in her mother’s arms.
This brings the number of protesters identified as being killed during the November protests to 755.
The Iranian Resistance declared on December 15, 2019 that the number of protesters killed in the protests in November 2019 exceeded 1,500.
The Iranian regime continues to refuse to announce the number of martyrs.
In a press conference on February 16, 2020, Rouhani said, “The Coroner’s Office has the figures… They can announce it…. There’s no problem with that.”
On February 17, 2020, the Head of the Coroner’s Office responded, “The ratification of the National Security Council, which is a subsidiary of the Government and is headed by the Interior Minister, have specified as to who must announce the figures… The Government must announce them… We have told the relevant authorities and have no duty to publicly announce them…. You can get all the information from the Interior Minister.”
The Iranian Resistance again calls on the United Nations Secretary-General to dispatch a fact-finding mission to Iran to investigate the status of those killed and wounded and visit the prisons and those arrested.
New sentences for those arrested during Iran protests in November 2019
The arrests and sentencing of political activists and those arrested during Iran protests in November 2019 continue.

Maryam Alishahi and her son were sentenced to a total of 15 years in prison for participating in Iran protests in November 2019. She is currently held in the Qarchak Prison of Varamin where she was informed of her sentence of 9 years.
Melika Gharagozlou, a student of journalism at Allameh Tabatabaii University in Tehran, was also sentenced to six months in prison by the Tehran Revolutionary Court. Melika Gharagozlou was arrested on November 17, 2019, during Iran protests in November 2019.
Forouzan Yazdani-Poor, a student of the School of Social Sciences of Tehran University, was also arrested at her home in Tehran, on February 22, 2020. There is no information of her place of detention and the reason for her arrest since that day.