A female journalist Zeinab Rahimi an environmental reporter, who worked for the state-run Iranian Students News Agency (ISNA) was fired on April 21, for criticizing the Director of Public Relations at the Iranian Department of the Environment. In a recent interview on state-run television, Amir Abdulreza Sepanji, Director of Public Relations at the Department of the Environment, claimed that some environmental journalists had been in contact with foreigners. (The state-run Ensafnews website – April 21, 2020).
Iran moved down three places to 173 as one of the worst violators of press freedoms in the latest Reporters Without Borders (RSF) 2020 press freedom index. The index ranks nations in terms of their pluralism, media independence, and transparency. In 2019, Iran ranked 170th; in 2020, it dropped three points to 173rd place. Iran is among the 17 countries marked in black on the Press Freedom Index map, indicating a “very serious situation.”
In its 2020 Press Freedom Index, RSF wrote, “The suppression of information, disinformation, official lies – methods used regularly by the Islamic Republic during times of crisis and disaster – have again been deployed since the start of the coronavirus pandemic. “
The RSF report continued, “Once the truth was out, the government did everything it could to restrict the flow of information about the crisis. Several journalists who published unofficial details about the crisis were summoned, questioned, and accused of ‘spreading rumors.’ One [journalist] who tweeted about the health conditions in prisons was arrested.”
In a statement on August 26, 2019, citing the wave of arrests and interrogations of women journalists, RSF declared, “Already one of the world’s five biggest jailers of journalists, Iran is now holding more women in connection with their journalistic activities than any other country in the world.” 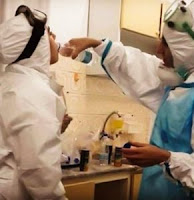 Women committee of the Iranian resistance NCRI
reported on April 23rd that a shocking report from inside Iran revealed that hospital nurses are not allowed to talk about patients with Coronavirus and have been instructed to register the disease as “acute respiratory distress syndrome” instead of Coronavirus. According to an eyewitness from Milad Hospital in Tehran, the prevalence of Coronavirus is much higher than before, but hospital nurses are not allowed to mention that the patient has Coronavirus. Two nurses at Milad Hospital were discharged from the hospital after telling some patients and their accompanies that they had the disease.
In a disturbing and inhumane measure, hospital authorities have taken away hazmat suits from the nurses and ordered them to care for patients with regular uniforms to avoid scaring the patients’ accompany. This is while 35 nurses at Milad Hospital have contracted Coronavirus.
According to People's Mojahedin Organization of Iran, on Thursday April 23, 2020, more than 34,200 people have died of Coronavirus in 296 cities across Iran.
Exclusive report: Hospital nurses silenced about Coronavirus
According to this eyewitness, currently 99% of the clients in Milad Hospital are Coronavirus patients and the situation is getting worse day by day. However, the hospital officials plan to fire 70 nurses on the pretext of downsizing the hospital.
However, Rouhani, the Iranian regime’s president announced April 18, 2020 as the end of quarantine and said that people should go to work.
Ebrahim Shakiba, the spokesperson of the headquarters against Coronavirus in Kermanshah University of Medical Sciences, announced on April 21, 2020 that since the beginning of the Coronavirus outbreak, 107 employees of various medical and health departments in the province had been infected with COVID-19. Shakiba said 23 of them are doctors, 40 are nurses and 44 are health staff and members.
In another news it has been mentioned that the highest number of people of the medical staff with Coronavirus are emergency personnel. (The state-run Salamat News website – April 22, 2020)
Emergency personnel are also Iran’s angels who are the first to serve patients with Coronavirus but are less talked about. Like hospital nurses, their work is very difficult, and many of them have developed psychological problems. One of them said our tasks have reached 100 patients a day. Work shifts are very tight, and they sometimes stay in the emergency room for up to two weeks.
On Thursday, April 23, 2020, the Iranian Resistance announced that the death toll from the Coronavirus crisis in 296 cities in Iran has risen to more than 34,200 people.