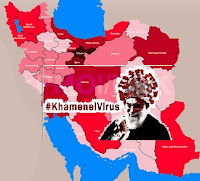 The People’s Mojahedin Organization of Iran (PMOI) announced this afternoon, June 27, that Coronavirus has taken the lives of more than 61,800 in 340 cities across Iran. The death toll in various provinces include: 4720 in Khuzestan, 3670 in Khorasan Razavi, 3145 in Gilan, 2228 in Lorestan, 1575 in Golestan, 635 in North Khorasan, 580 in Hormozagan, 561 in Bushehr, 415 in Ilam. This is in addition to reports obtained from other provinces.

A member of the regime’s parliament called for State Security Force’s intensifying crackdown on women in reaction to their open opposition to the compulsory veil. “In addition to promoting the culture (of Hijab), combating women who remove their Hijab requires the action of the State Security forces,” Ali Akbar Karimi, member of the regime’s parliament from Arak said while calling for more vicious crackdown on women. Referring to the growing open opposition to the mandatory veil in public, he said, “There are more and more examples of women who flout the veil in the open and because they are not dealt with, these behaviors have become prevalent in society.” Karimi also called for the arrest of women who publish posts and photos (which show them without the veil) in the social media. “We want more seriousness in dealing with the damages and insults and the spreading of lies and rumors in the social media,” he said (The state-run ISNA news agency – June 25, 2020). In a related development, a woman was arrested in Amol on June 23, 2020, for publishing a photo in the social media without wearing the compulsory veil. Amol’s Public and Revolutionary Prosecutor stressed that the punishment for women who violate the hijab law is up to two years in prison. (The state-run ROKNA News Agency – June 23, 2020) In another case, the state-run media announced on June 23, 2020 that during a joint operation in the city of Arak, FATA (Iranian Cyber Police) and PAVA (Iranian Security Police) forces arrested a young couple who were administrators of a Telegram channel. Abbas Ghassemi, the Public Prosecutor of Arak, said, “Moral security is one of the priorities of the Judiciary and the State Security Force. Those who attempt to disrupt the society’s security will be dealt with forcefully and without any limitations.” (The official IRNA news agency – June 23, 2020) Earlier in June, a significant number of women were arrested in Khorasan Razavi Province for posting photos in the social media “without wearing the veil.”

Contract teachers, as well as teachers from the Literacy Movement, staged a 3-day protest in front of the Iranian regime's Majlis or Parliament from June 21 to June 23. During the 3-day protest the teachers demonstrated against ill-defined conditions of employment conditions, job instability, and the challenges of maintaining a livelihood. While protesting, teachers chanted, “Neither discrimination nor exams, justice, justice.” State security forces attacked protesters, arresting several. At least 3 people were arrested.
Women Attacked and Arrested During 3-Day Protest by Tehran Teachers “Officers beat and arrested three teachers. But the teachers continued their protests and chants,” reported one of the protest’s participants. The teachers in the Literacy Movement have worked for years; some have as many as 10 years of teaching experience. However, since last year, they have been asked to take teachers’ university entrance exams to be officially hired. Iran’s Council of Retirees issued the following statement in support of the 3-day protests by teachers: “These teachers have been teaching and training students for years. They have had to live with meager wages, substandard facilities, and minimal benefits. They have not even enjoyed job security. Every year, more than in the prior year, the teachers worry about job security and earning a decent living. Although these teachers have years of teaching experience and are obviously eligible for employment, they are still in limbo while waiting to be hired by the Ministry of Education.” Unfortunately, under the Mullahs’ rule in Iran, living conditions for teachers – more than 50% of whom are women – are far below acceptable standards. Iranian teachers must contend with remaining unpaid for months; suffering unfair wage adjustments given the rising cost of living; and having no medical insurance. Instead of being able to focus on providing a good education for their students, teachers in Iran are preoccupied with making ends meet.

Some women heads of household in Iran have taken refuge in city outskirts due to poverty and lack of adequate housing. They live in tunnels and holes underneath dilapidated buildings. These women are part of Iran’s at least 38 million people who live in shanty towns and slums. Sleeping on the streets, or even in empty graves – and now in underground holes – are among the phenomena the Iranian regime has imposed on Iranian society. More than 80 percent of Iranians live below the poverty line due to the regime’s predatory policies. According to regime experts, the face of poverty in Iran is feminine.
“Some women heads of household often live in ruins, dilapidated buildings, underground holes, and water wells, mostly because they are homeless. Some of those who live in slums or tents do not have proper accommodation,” said Mohammad-Reza Mahboubfar, a social researcher, in a statement to state-run media (The state-run website Etemad Online – June 22, 2020).
“The number of women heads of household in the country has also increased. These people are facing many problems due to homelessness and inflation, and lack of basic necessities such as jobs and housing. Some of these women are forced to emigrate to the suburbs where they are vulnerable to various social ailments such as violence, addiction, (forcing them into) selling their babies and prostitution. They are deprived of social support from official institutions. Even among those who have “decent” jobs, some women heads of household live below the poverty line and are deprived of minimum living standards,” Mahboubfar added.
At least 60 percent of Tehran’s population live in the slums and shanty towns
Referring to the shocking increase in the population of Iranians who live in slums and shanty towns, Mahboubfar said, “It was estimated in the past that there were about 25 million residing in the slums, but today that number has risen to 38 million. We can even say that population of slum dwellers in Tehran has increased by 60%.”
According to the social researcher, “Before the Coronavirus, the poverty line was 8 million Tomans… Most slum dwellers, day laborers, seasonal workers, peddlers, and so on, have lost 70 to 80 percent of their salaries. It is natural that they go to the city outskirts to seek housing and shelter. Part of the city outskirts consists of slums; the other part consists of tents or other deficient shelters. Homeless people have built makeshift, unsanitary settlements that generate crime.”

Iranian Kurdish Political prisoner Zeinab Jalalian began her hunger strike on June 20th, in protest of not being transferred from Qarchak Prison. Zeinab's request who is infected with the Coronavirus, is to be either transferred to Evin Prison, where most women political prisoners are kept, or returned to the Prison of Khoy where she was previously held. Zeinab Jalalian is currently being held in the quarantine ward of Qarchak Prison and is denied access to medical treatment.
“Political prisoner Zeinab Jalalian also suffers from asthma. Due to her infection with the Coronavirus, she coughs constantly, and her lung condition has deteriorated. After her infection with the Covid-19 was confirmed, she had a chest X-ray and was immediately returned to the quarantine ward of Qarchak Prison”, an informed source said about Zainab’s illness.
Sanitary conditions in the quarantine ward are horrible. This ward has even fewer facilities than other parts of the prison.
A specialist physician had previously told Zeinab Jalalian: “She needs to recover in a stress-free environment with good hygiene and healthy food as well as being under doctors’ supervision. Otherwise, there is a possibility of irreparable damage to her respiratory system.”
The situation in Qarchak prison is reported to be very serious. Women infected with the Covid-19 have been transferred to a place called the Prison Club, which is unsanitary and without proper ventilation. They are being held there without medical care, treatment, or food.