Over 96,900 people have lost their lives due to Coronavirus in 409 cities across Iran’s 31 provinces, according to reports tallied by the Iranian opposition People's Mojahedin Organization of Iran (PMOI/MEK) as of Sun afternoon local time, August 30.

On Wednesday, August 26, the Iranian regime’s repressive forces attempted to destroy the homes of the villagers in Abolfazl in the Kianshahr district of Ahvaz in Khuzestan province. They attacked the villagers who were protesting and preventing the destruction of their homes. The repressive forces used Winchester BB guns and tear gas. At least 10 residents, including several children, were wounded and dozens were arrested.

The Iranian regime’s Judiciary retaliated against the universal condemnation of the execution of Mostafa Salehi, an imprisoned protester who was executed on Aug. 5, 2020 and protests by Iranians in different countries by ordering Salehi’s wife to pay 425 million tomans apx $10,000 US as blood money. If that sum is not paid, the house and all properties of his bereaved wife and two orphaned children will be confiscated. Mrs Maryam Rajavi wrote in a tweet on Aug. 27: #Iran’s ruling mullahs have surpassed all boundaries in ruthlessness. Those who under the mask of “families” shed crocodile tears for PMOI members, are demanding the bereaved wife and orphaned children of #MostafaSalehi to pay for the execution of their husband and father.

Mr. Massoud Rajavi, the chair of the National Council of Resistance of Iran, NCRI, said in a message on August 26, following the designation of 14 Iranian individuals for their involvement in gross violations of human rights on behalf of the Iranian regime, the world’s leading state sponsor of terrorism. Those individuals were involved in the assassination of Dr. Kazem Rajavi, Masoud's brother. Masoud Rajavi said in his message: In addition to the assassins of my brother, Kazem, the perpetrators and the masterminds of all assassinations and crimes committed inside and outside Iran by the ruling religious fascism must be sanctioned and punished for their actions. They include the assassins of Qassemlou in Vienna, Bakhtiar and Boroumand in Paris, Fereydoun Farrokhzad in Bonn, Akbar Ghorbani in Istanbul, Sharafkandi in Berlin, Naghdi in Rome, Zahra Rajabi and Ali Moradi in Istanbul, Mohammad Hassan Arbab in Karachi, and dozens of others, he added. Mr. Rajavi said: These crimes are in addition to hundreds of other terrorist crimes perpetrated by Iran’s ruling theocracy against the Iranian Resistance, the Peshmargas and our Kurdish brothers in Iraqi territory and Iraqi Kurdistan.

Imprisoned 17 year old Kurdish teenager Aynaz Zare’e has been infected with the Coronavirus while detained with her mother, Shahnaz Sadeghifar, in the women’s ward of the Central Prison of Urmia. On Tuesday, August 25, Aynaz was transferred to a hospital out of prison where she was hospitalized in the Emergency section of the Taleghani Hospital of Urmia for respiratory problems and short breath.

- Civil activist and theatre actress Mehraban Keshavarzi was arrested and detained on August 19, 2020, after referring to Evin Prison to follow up on her case.

- Ms. Keshavarzi is a master’s student of acting at Tehran’s School of Art. She had been arrested in September 2015 for her activities in Tehran’s Allameh Tabtabaii University. The intelligence forces of the IRGC took her to Ward 2A of the IRGC Intelligence in Evin Prison.

- Marjan Es’haghi, a student of political sciences at Tehran University, was arrested during the protests in November 2019. She is supposed to face trial by the Revolutionary Court of Tehran on September 6, 2020.

Civil activist Farangis Mazloum, mother of political prisoner Soheil Arabi, appeared before Branch 29 of the Revolutionary Court of Tehran on Tuesday, August 25. Ms. Mazloum is accused of “assembly and collusion to commit crime through making contacts with the People’s Mojahedin Organization." Her son political prisoner Soheil Arabi, 32, married with a daughter, has been detained for posting notes critical of the regime in his Facebook account. He spent 4.5 years in Evin Prison. In February 2018, he was sent into exile to the notorious Great Tehran Penitentiary (a.k.a. Fashafuyeh). He has staged long hunger strikes, at least three times, in protest to the brutality of prison guards in Evin and Fashafuyeh.

Retired teacher and political prisoner Nahid Fat’halian has been returned to the women’s ward of Evin Prison after completing her interrogations. Four months since her initial arrest, Ms. Fat’halian remains in custody in an undetermined status without being tried. Political prisoner Nahid Fat’halian was arrested on April 14, 2020, by agents of the Ministry of Intelligence in Tehran. She was taken to the women’s ward of Evin after several days of interrogation. Nahid Fat’halian was one of the teachers’ union activists who rushed to the aid of flood victims in the Spring of 2019, in which she collected aid packages every day and played an active role in this relief effort. 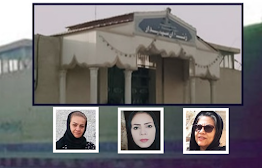 Female political prisoners are harassed and tortured in Sepidar Prison of Ahvaz, in Khuzestan. This is a common practice by the regime to terrorize the society and create an atmosphere of fear.

The prisoners in the women’s ward of Sepidar Prison of Ahvaz are not separated according to the category of crimes, making the conditions even more difficult and intolerable for the female political prisoners.

Virtually, all female political prisoners have been tortured under interrogation. Some of them were pregnant while being interrogated.

Following is a partial list of them and a brief information, as much as it was available:

Elaheh Darvishi, 20, married with a child. She was 18 and pregnant at the time of arrest. She delivered her child while in prison;

Sakineh Segour, 35, married with two children. She was pregnant when she was being interrogated. She was sent to hospital to deliver her baby as she was drenched in blood and her hands and feet were in cuffs;

Mahnaz Amouri Faissali, 38, married with a 10-year-old son. Her only crime was to help her 15-year-old niece, Maedeh Sha’abani Nejad, hide from agents of the Intelligence Department who wanted to arrest her;

Nejat Anvar Hamidi, 62, who has caught the coronavirus. She had been imprisoned in 1981 for 2 years and 4 months. Then, she was arrested again in 2017, and sentenced to 5 years in prison for supporting the People’s Mojahedin Organization of Iran (PMOI/MEK) in March 2019. Since that time, she has been suffering from acute eye illness and is at risk of losing her eye sight;

Maryam Zobaidi, 53, married with three sons and a daughter, from Zeitun district of Ahvaz. She was arrested on March 15, 2018 along with two of her sons, 26 and 29 years old. One of her sons, Benjamin Albu Ghabish, was killed under torture on June 26, 2019;

Political prisoner Fatemeh Mosanna was taken to Taleghani Hospital in Tehran on Wednesday, August 19, 2020, after going unconscious in the women’s ward of Evin Prison. Her hands and feet are cuffed to the hospital bed since that day. She is denied from being visited by her children and relatives. Political prisoner Fatemeh Mosanna earlier had symptoms of fever and chills. Ms. Mosanna’s children referred to the Taleghani Hospital to see their mother, but they have not yet managed to visit her. They have been told that their mother is tied to her bed, on the orders of Amin Vaziri, the special prosecutor for political prisoners. Political prisoner Fatemeh Mosanna had been granted prison leave on bail on March 31, 2020. But she was rearrested on May 6, 2020, by agents of the Prosecutor’s Office and transferred back to Evin Prison. The sanitary conditions in Evin Prison have been reported to be dire. Imprisoned human rights lawyer Nasrin Sotoudeh who is also imprisoned in the women’s ward of Evin, in an open letter on August 11, 2020, announced her hunger strike in protest to “the oppressive conditions in jail, and after receiving no answers to the letters and legal demands of prisoners.” It was reported that at 7 p.m. on Wednesday, August 19, 2020, Ms. Sotoudeh was transferred to the dispensary of Evin Prison because of her critical conditions. Fatemeh Mosanna and her husband, Hassan Sadeqi, were arrested on April 9, 2014, for holding a funeral ceremony for his father, deceased on January 29, 2014, in Camp Liberty, Iraq, where PMOI members were held under siege. The couple were later sentenced to 15 years in prison for having contacts with the People’s Mojahedin Organization of Iran. Their house and shop were confiscated by the Iranian regime in March 2019. The couple have been deprived of visits for a long time. Fatemeh Mosanna was a political prisoner in 1981 and detained for two years when she was only 13 years old. Three of her brothers were executed that year by the clerical regime.
Posted by Radio Irava at 9:58 a.m.