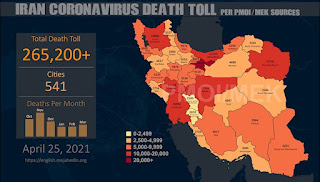 Over 265,200 people have died of the novel Coronavirus in 541 cities across Iran, according to reports tallied daily by the Iranian opposition People's Mojahedin Organization of Iran (PMOI/MEK) as of Sunday, April 25. 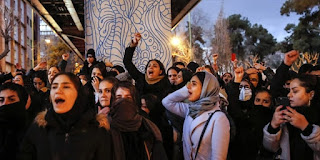 The CSW 65th session on Monday, April 19, elected Iran’s ruling religious fascism, the first enemy of Iranian women, as a member of the UN Commission on the Status of Women for a four-year term from 2022 until 2026. Describing the CSW measure as “outrageous and shameful,” the NCRI Women’s Committee Chair, Sarvnaz Chitsaz, pointed out: Electing the misogynist, fascist regime in Iran to the UN Women’s Commission gives it a free rein to further suppress and marginalize Iranian women.” The NCRI Women’s Committee(National Council of Resistance of Iran) believes that “membership of Iran’s ruling theocracy in the Commission on the Status of Women (CSW) gives the regime a green light to suppress Iranian women more and more.” The NCRI Women’s Committee urges the UN ambassadors of the US., EU., and Canada to condemn the UN’s election of Iran to a 4-year term on CSW, the “principal global intergovernmental body exclusively dedicated to the promotion of gender equality and empowerment of women.” Despite the CSW’s disgraceful vote, the people of Iran and particularly Iranian women have vowed not to vote for this regime and its sham elections. And it will not be long before the Iranian people and Resistance will overthrow the regime and replace it with a democratic, pluralist government. https://tinyurl.com/4b83tdr5
Posted by Radio Irava at 1:51 p.m.