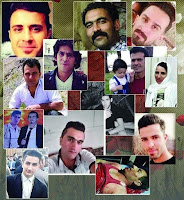 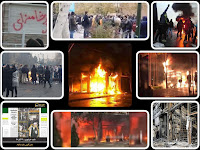 The names of 99 martyrs killed by security forces in 20 cities during
Iran protests have been verified and published by the Iranian Resistance. The list includes the names of seven women, three of whom had already been announced by the Women’s Committee of the National Council of Resistance of Iran. The total number of women killed during Iran protests thus reaches 10. The three remaining names have not been obtained, yet. The number of martyrs of Iran protests has reached 300, the number of wounded is estimated to be more than 4000 and more than 10,000 have been arrested. Most of those killed were young or teenagers, even as young as 13. Most were shot in the head or chest by the regime’s snipers. The regime is employing various ploys to try to conceal the actual death toll. In many instances, suppressive forces refuse to hand over their bodies for independent autopsy or to their families. Mrs. Maryam Rajavi, the President-elect of the National Council of Resistance of Iran (NCRI), urged all compatriots to actively attend the memorial services of the martyrs, provide care and treatment to the wounded and injured, and look after families who have lost their guardians. She called on the United Nations Security Council, governments, and international human rights organizations to demand an immediate halt to the killings and suppression and to demand the immediate release of prisoners. The UN Security Council must declare Ali Khamenei, Hassan Rouhani, and other regime officials as criminals against humanity for their involvement in suppression and bloodshed so that they face justice and trial. The UN must urgently send fact-finding missions to Iran to conduct investigations around the killings, casualties, wounded, and prisoners. The Iranian regime blocked out the internet on the second day of the Iran Protests in entire Iran in order to hide the atrocities against the peaceful demonstrators. Based on Net Blocks on Sat. the national connectivity was up to %64.
Iranian supporters of the Iranian resistance have had gatherings in support of Iran protests at the Parliament Hill and across from Prime minister's office.

Fifty Tehran University students were arrested after participating in 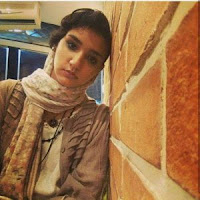 protests in solidarity with Iran protests over fuel price hike on Mon Nov 18. They were transferred to Evin and Fashafouyeh prisons by ambulances. In a similar development, Melika Gharagozlou, a student of journalism at Tehran’s Alameh Tabatabaii University, was arrested by intelligence agents on the street on Sunday, November 18. In a brief phone call to her family, she told them she was detained in Evin Prison. The latest data compiled by the Iranian opposition, People’s Mojahedin of Iran, indicates that at least 165 cities have seen the uprising.

******
A Tehran Court upheld the sentence for student activist Parisa Rafii for 7 years in prison and 74 lashes.

On Saturday, November 16, Branch 98 of the Revolutionary Court of Tehran upheld a sentence of 7 years’ prison, 74 lashes, and 2 years ban on leaving the country for this female student activist.
Parisa Rafii, 23, a student of art at Tehran University, was charged by branch 26 of the Tehran Court with association and conspiring “crimes against national security”, “propaganda against the state”, and “disturbing the public.”
According to her mother, her appeals court which was to be held on July 2, 2019, was canceled and her charges were issued in absentee.
Parisa Rafii was arrested on February, 25, 2018, by the Intelligence Ministry agents in front of Tehran University and transferred to Ward 209 of Evin Prison. Her lawyer had previously said, “In my opinion there is no logical or legal reason in the files for an absolute justification that she committed a crime. The crimes she is charged with are all normal behavior and in the framework of laws and rights of the nation under the constitution and civil rights for all citizens especially a student activist. Unfortunately, by issuing this sentence, legal and juridical fairness, justice, principles, and values are undermined and I will request an appeal.”
While being held in Evin Prison, Parisa Rafii wrote a letter revealing illegal pressures on female political prisoners. In parts of her letter she wrote: “I chose to write this letter under the circumstances of knowing what pressures are put on those who reveal such experiences and what effects it would have on their cases and issued sentences.”