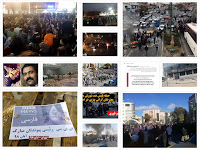 Some 93 cities across Iran are witnessing escalating protests in response to a gasoline price hike imposed by the regime in Iran. People in Tehran and other major cities throughout the country are blocking roads and highways in their sign of protests. Based on some reports 163 people have been killed and injourd in Kurdistan province alone. Maryam Rajavi President elect of the National council of Resistance of Iran for the transition period from the beginning in her twitter account supported people's uprising and called upon others to join in. She also saluted the martyrs. Women have also a significant role in the uprising. The Iranian regime though has cut off internet and cell phones so that people can't send out their videos. Some members of the Congress have condemn the Iranian regime for this.
Mike Pompeo also twitted: As I said to the people of Iran almost a year and half ago: The United States is with you.
In a video sent out by the People of Shiraz, the Iranian regime's agents open fire on protesters from a helicopter. In many cities people have set banks, Seminaries, and centers of repression on fire. On two different videos people are preparing food for the protesters and giving money to a driver whose car was smashed by the regime's agents.

The Revolutionary Guards Corps (IRGC) agents arrested two human rights activist women, Raheleh Rahemipour and Jila Karamzadeh Makvandi, in Tehran on November 12. As the IRGC agents were searching the residence of Raheleh Rahemipour they insulted her children, took her son to another room and brutalized him. Her son and daughter were told to report to the Courthouse of Evin later that week.
A source close to the arrested women said their families had referred to Evin’s Courthouse as well as the Guidance court and detention center, but were told that Raheleh Rahemipour and Jila Karamzadeh Makvandi were not there. The next day, however, Ms. Makvandi’s family were told at the Courthouse of Evin that their cases are filed with the Inspections Department of the Courthouse of Evin and that they should not inquire about them until Sunday.
Jila Karamzadeh Makvandi is an artist, poet, and a human rights activist. She was one of the first women to join the Mothers of Laleh Park movement.
-
On Wednesday, November 13, the Sharia court convened to examine the case of imprisoned labor activist Neda Naji. Her husband, Jamal Ameli, later tweeted that “Neda Naji’s court convened but did not issue a bail bond, and she was returned to prison.”
Additionally, political prisoner Samaneh Norouz Moradi who has been incarcerated in Evin Prison for eight months, has been denied access to hospital treatment. She is in poor health and suffering from a joint disease. Prison authorities, however, refrain from sending her to hospital or granting her a medical furlough. Ms. Norouz Moradi’s eyes have also been bleeding and she is suffering from other health problems including stomach and intestinal ulcer.

The Third Committee of the General Assembly of the United Nations censured for the 66th time, flagrant violations of human rights in Iran.
The Third Committee of the UN General Assembly adopted a resolution which was brought forward by Canada, with 84 affirmative votes on Thursday, November 14, condemning the grave and systematic violations of human rights in Iran.
Mrs. Maryam Rajavi, the President-elect of the National Council of Resistance of Iran (NCRI),for the transition period welcomed the adoption of the 66th UN resolution and added: I emphasize that impunity for the clerical regime leaders must end and they must be prosecuted. Those responsible for the majority of the crimes to which the resolution has referred are the very people who have been continuously perpetrating crime against humanity for the past four decades, in particular the 1988 massacre of political prisoners. She said: this resolution reaffirms the indisputable imperative that impunity for the criminal leaders of this medieval regime should end and all of them must face justice for 40 years of crime against humanity.
The UNGA Third Committee expressed serious concern “at the alarmingly high frequency of the imposition and carrying-out of the death penalty” in Iran, and voiced alarm at the “widespread and systematic” use of arbitrary arrests and detentions, prison conditions and discrimination against women.
Article 17 of the resolution strongly urged the Iranian regime “to eliminate, in law and in practice, all forms of discrimination and other human rights violations against women and girls, to take measures to ensure protection for women and girls against violence and their equal protection and access to justice, to address the concerning incidence of child, early and forced marriage, as recommended by the Committee on the Rights of the Child, to promote, support and enable women’s participation in political and other decision-making processes, and, while recognizing the high enrolment of women in all levels of education in the Islamic Republic of Iran, to lift restrictions on women’s equal access to all aspects of education and women’s equal participation in the labour market and in all aspects of economic, cultural, social and political life, including participation in and attendance at sporting events.”
In Article 18, the resolution calls upon the Iranian regime “to release women human rights defenders imprisoned for exercising their rights, including the right to freedom of association and peaceful assembly and the right to freedom of expression and opinion, and to take appropriate, robust and practical steps to protect women human rights defenders and guarantee their full enjoyment of all their human rights.”

Iranian Sharia courts have sentenced three Baha’i women to long prison term sentences during the past days for their faith.
Yalda Firouzian who resides in Semnan Province, has been sentenced to six years in prison. She was also deprived of staying in Semnan for two additional years. Yalda Firouzian who has been imprisoned since April 2019, was charged with “membership in outlaw groups acting against national security” and “acting against national security through organized activities and propaganda.”
An appeal sharia court in Iran’s southern Kerman Province sentenced other members of the Baha’i faith to a total of 12 years behind bars on Saturday, November 9, 2019. Kiana Rezvani and Kimia Mostafavi residing in Kerman were sentenced to six years in prison each.
Kiana Rezvani had previously been deprived of admission to university in 2016 due to her Baha’i faith despite passing the entrance test.
Also on November 9, another Baha’i woman, Samin Maqsoudi was taken to Tehran’s notorious Evin Prison to begin serving a five-year-sentence. The Revolutionary Court of Tehran had sentenced the Baha’i woman to five years in prison for her belief in the Baha’i faith, on September 22, 2019.
In another case in July 2019, that highlights the persecution of Baha’is on religious grounds, the Revolutionary Court of Birjand sentenced nine Baha’i citizens, including four Baha’i women, to 54 years in prison. The sentenced women were Maryam Mokhtari, Ra’fat Talebi Fard, Shaida Abedi, and Simin Mohammadi. They have each been sentenced to 6 years’ imprisonment.

Amnesty International issued an urgent action on November 13, 2019, calling for the release of imprisoned Kurdish activist Zahra Mohammadi.
AI wrote in its statement: “Zahra Mohammadi, a Kurdish civil society activist, has been accused of co-operating with Kurdish opposition groups and charged with national security offences for her peaceful activities empowering members of Iran’s marginalized Kurdish community, including through teaching the Kurdish language. On 18 September 2019, without prior notice to her lawyers or family, Zahra Mohammadi was transferred to Branch One of the Revolutionary Court of Sanandaj for a hearing which was subsequently postponed.”
Amnesty International stressed that “Zahra Mohammadi is in poor health. She currently has a stomach-related illness. She also has a pre-existing digestive condition that requires medication, which she has been unable to take in prison.”
Amnesty International urged Iranian authorities to “release Zahra Mohammadi immediately and unconditionally as she is a prisoner of conscience detained solely for her peaceful civil society activism. Pending her release, please ensure that she is protected from torture and other ill-treatment and  can  receive  regular  visits  from  her  lawyer  and  family,  as  well  as  adequate  medical  care, including any specialized treatment she may need.”
Zahra Mohammadi, 29, was a member of Nojin Social and Cultural Association in Sanandaj which is active in protection of the environment in Kurdistan. Zahra holds an M.S. degree in geopolitics from the University of Birjand, capital of south Khorasan Province. She had been teaching Kurdish language in Sanandaj and its surrounding villages for ten years.
AI calls for release of Kurdish civil activist Zahra Mohammadi
She was arrested on May 23, 2019, when agents of the Intelligence Department of Sanandaj raided her residence.
On May 30, the family of Zahra Mohammadi was able to visit her after eight days when she was under intense interrogation to make forced confessions against herself.
She has been held in detention for five months and remains in jail despite her family’s depositing of 700 million tomans ($166K) of bail bond for her temporary release.
On September 18, 2019, Ms. Mohammadi was secretly taken for trial without informing her lawyer or family. Upon finding out, her family and lawyer objected this trial and the trial was eventually postponed to September 25.