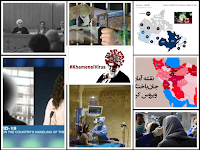 The People’s Mojahedin Organization of Iran
(PMOI/MEK) announced on May 7, that the Coronavirus death toll in 315 cities in Iran had exceeded 40,500.
According to NCRI statement( National Council of Resistance of Iran) Over 50 female inmates have caught the Coronavirus infection in the Sepidar Prison of Ahvaz, southwestern Iran. Reports say these women have been taken to Sepidar’s quarantine ward after showing symptoms of infection such as chills and fever. The prison doctor is also ill and there is no one to attend to and treat these 50 female inmates suffering from COVID-19. The inmates do not have access to medications and even the medicines procured by their families are not accepted by prison authorities who do not see themselves accountable to the families. The ward where the infected inmates are being held is separated from other wards and other prisoners only by several iron bars. The situation is also deplorable in Qarchak Prison for women in Varamin. At least, another 20 infected female inmates have been transferred to the quarantine ward and held in intolerable conditions. An inmate recently released from Qarchak Prison wrote that at least 100 female inmates in Qarchak Prison have been infected and suffer from COVID-19. These women are locked down in a ward called the “club.”
In a press conference on Sunday, May 3, Shahla Khosravi, Iran's Deputy Health Minister at Midwifery Affairs, made a shocking announcement  and said “Since the outbreak of the Coronavirus in the country, about 500 pregnant women have been hospitalized and 200 pregnant women have been treated on an outpatient basis.” “Thus far, 20 babies in Iran have been born with the Coronavirus” she added, without any further explanation. Regarding the number of deaths among midwives, Ms. Khosravi said: “About 40 to 50 have been hospitalized. Unfortunately, three midwives died” (The official IRNA news agency – May 3, 2020).

The Iranian Resistance issued a statement on May 5, publishing the names and pictures of 20 Iranians including six women and two elite students from Sharif Industrial University who have been arrested in Tehran and other cities. The secretariat of the National Council of Resistance of Iran said these are among the many who have been arrested in recent months. The six arrested women are: Nahid Fat’halian, Parastoo Mo’ini, Zahra Safaei, Forough Taghipour, Marzieh Farsi and Somayeh Bidi. The two elite students of Sharif Industrial University are Ali Younesi and Amir Hossein Moradi who had been arrested on April 10, 2020, by intelligence agents and taken under torture.
Ali won the gold medal of the 12th International Olympiad on Astronomy and Astrophysics, held in China in 2018. Earlier, he had won the silver and gold medals of the National Astronomy Olympiad in 2016 and 2017. Amir Hossein also won the Olympiad silver medal in 2017.
The Judiciary Spokesman Gholam-Hossein Esmaili acknowledged on Tuesday, May 5, the arrests of Amir Hossein Moradi and Ali Younesi, saying they had linked up with the PMOI (MEK). Reciting a series of trumped-up charges, he added that they had engaged in “diversionary actions” and were “attempting to carry out sabotage operations.” “Explosive devices used in sabotage operations were discovered when their homes were searched,” he said.
Ayda Younesi, Ali’s sister, in a video clip published on her twitter account on May 5, exposed the Intelligence Ministry’s conspiracy against her brother. She said in this clip: “The Judiciary tortures physically and psychologically to extract forced confessions. No one expects any honesty from you (the Judiciary). The night (of the arrest) your agents said they had found nothing suspicious in our house. And inspector of the case emphasized several times that there is no problem in Ali’s case. You were right when you said you don’t care about anyone’s profession or education. We also know well that you do not care about students. You don’t believe in citizen’s rights, otherwise we would not have such a brain drain in the country. You do not have any evidence against Ali, because if you did you had already publicized it a hundred times.”
Mrs. Maryam Rajavi, the President-elect of the National Council of Resistance of Iran (NCRI), emphasized that the detainees are subject to torture and face execution, as well as in danger of being exposed to Coronavirus.  She again urged the Secretary-General of the United Nations, the High Commissioner for Human Rights, and the Human Rights Council, as well as the international human rights organizations to take urgent action to secure the release the  detainees and to send international missions to visit the regime’s prisons and meet with these prisoners.
The Iranian Resistance demands that the clerical regime publishes the names of all the detainees and respect all their rights by the international conventions to which it is a party. Since the December 2017 uprising, a significant number of dissidents have been murdered under torture.

Political prisoner Atena Daemi, a child rights activist, refused to appear in court on May 2. She was protesting a verbal summons and a new case being filed against her.
According to the 32-year-old prisoner, she refused to appear in court for several reasons: the spread of Coronavirus in the country; her lack of access to a lawyer; and the insufficient time between receiving the formal notification and the trial date. Atena had refused to appear in court previously, on March 11, and April 18, 2020, for similar reasons.
The political prisoner has been deprived of visits. However, the ban on visitation, in effect since 2019, was issued verbally and has yet to be presented in writing. Atena has been denied access to a lawyer the entire time.