The People’s Mojahedin Organization of Iran (PMOI/MEK) announced on, May 17, that Coronavirus has taken the lives of more than 42,400in 319 cities across Iran. Fearing the restive Iranian society and a nationwide uprising, the Iranian regime, instead of helping people amid the coronavirus outbreak, is increasing its suppressive measures only to prolong its rule. In an interview, IRGC Brigadier General Hassan Karami said that in 2020, “special attention” had been paid to the infrastructure of the anti-riot force and its equipment and that this “unparalleled” support had increased the force’s responsibility. “2020 is the unique year for the Special Forces in terms of infrastructure and equipment,” he said. “The support of the Anti-riot unit is excellent, and this unit is well provided with the equipment and facilities. This unit also enjoys vast support in the field of infrastructure in the country, including the completion and development of barracks, tools and training facilities required by barracks, and having access to the necessary specialized equipment and manpower.”

On International Nurses Day May 12, a selfless and 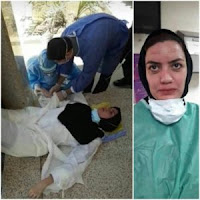 hard-working nurse named Zahra (Behnaz) Mostaedi died at Labafinejad Hospital in Tehran-Iran. The 42-year-old nurse suffered a cardiac arrest due to pressure at work. She worked in the hospital’s ICU, caring for Coronavirus patients around the clock. She died while on duty according to the state-run Naja News Agency – May 13.
In Khuzestan Province, another nurse, Zahra Absalan, fell to the ground after fainting due to excessive fatigue. She oversees the laboratory in Hamidiyeh and had been working while fasting for the month of Ramadan.

A group of Iran nurses and medical staff held a protest outside the Ministry of Health on May 13, to demand their long overdue payments and fees as well as permanent employment by the ministry.
One of the nurses participating in this protest said contractors who do not have any experience in medical issues are employing nurses and paramedics as daily laborers and on temporary contracts.
“Having no insurance or annual benefits, as well as discrimination against the personnel who are employed on temporary contracts compared to those who are officially employed, have made daily life difficult for us. Every day, we are under stress of beingfired. We will no longer tolerate this situation and we will not stop our protests until our demands are met.”
Another nurse said, “We have been in the hospital round-the-clock, 24-hours a day for three months. Not only they do not pay us any fees for the difficulty of our job, our annual benefits and our overtime fees, but they have not even paid our past-due salaries. How are we going to sustain a living during this crisis with illness and high prices?”
The Iranian regime has not paid the salaries and past-due fees of Iran nurses, and has even expelled them from their jobs on various occasions.

Agents of the clerical regime’s Intelligence Ministry have harassed and intimidated Aida Younesi with sexual and life threats after she posted a video for her brother's release on twitter.
Ali Younesi, a student of Sharif Industrial University and gold medal winner of the International Olympiad on Astronomy and Astrophysics in 2018, was violently arrested on April 10, 2020. Also arrested on the same day, was Amir Hossein Moradi, another elite student of Sharif Industrial University.
On May 11, Aida Younesi posted a tweet, addressing the regime’s Judiciary: “You violently broke in and took (my brother) away. And yet you cannot tolerate a 2-minute video clip responding to the baseless accusations of the Judiciary’s spokesman.”
Ms. Younesi pointed out that after reacting to the charges announced by Judiciary spokesman Gholam Hossein Esmaili, she had faced “insults as well as sexual and life threats,” adding, “Even some of their agents who are authorized to fire at will threatened to murder and execute me.” She reiterated, “In the absence of the rule of law in your  Islamic country, there is no place to file any complaint against you. But I have done so with the British Police.”
Ms. Younesi also revealed that her earlier video clip in response to the director of Bassij at Sharif Industrial University had drawn reaction from some officials who contacted her parents, and told them: “Tell your daughter to remove the video clip.”
Aida Younesi published a video clip on her twitter account on May 5, exposing the Intelligence Ministry’s conspiracy against her brother. She said in this clip: “No one expects any honesty from you (the Judiciary). The night (of the arrest) your agents said they had found nothing suspicious in our house. And the inspector of the case emphasized several times that there is no problem in Ali’s case… You do not have any evidence against Ali, because if you did you had already publicized it a hundred times.”

From now on, married women in Iran are required to obtain their husband’s consent/permission before they can sit for a dental assistant’s exam. On May 11, the state-run daily, Etemad Online, posted on its website: “As part of the declaration, a husband permits his wife to serve at the location designated by the Ministry of Health and Medical Education upon completing the training course.”
Etemad Online reiterated, “This declaration and the requirement for the husband’s consent is an issue that creates a problem for some female applicants in this field, and reminds us of the inequality that exists in national laws when it comes to men’s and women’s rights.”
“When a woman is obliged to obey her husband in general, as well as for particular activities; and her whole life is under his supervision, consent, and permission, we must expect such things,” said a women’s rights activist.
It was announced earlier that married women must have their husband’s permission before they can participate in any hiking or nature tours. Single women, as well as women under the age of 20, must have their father’s permission (The official IRNA news agency – November 13, 2018).
Misogyny is institutionalized in the clerical regime’s laws. The mullahs’ Civil Code treats women as men’s captives or sex slaves.
Specifically, a nine-year-old girl can be forced by her father to enter into a marriage, and she is required to live anywhere her “husband” wants. She cannot leave home, go to work, or travel without her “husband’s” permission.
Article 1105 of the Civil Code stipulates, “The family is headed by the husband and the woman may not leave home without the husband’s permission.”
Moreover, Article 1117 of the Civil Code states, “The husband can prevent his wife from engaging in any profession or industry that conflicts with the family’s interests, or his dignity, or that of his wife.”

On the Saturday night, May 2, 2020, several men attacked the female child laborer in Enqelab Square in a bid to rob her day’s income. Facing the little girl’s resistance, they doused her with gasoline and set her alight. Fortunately, some passers-by arrive and extinguish the fire before it causes severe injury.
Due to widespread poverty in Iranian society, millions of Iranian children have to work in factories, workshops, buildings, streets, and houses of other people to have some income. Most of these child laborers are helping their families earn a living, or are themselves in charge of supporting the family. (The state-run Asr-e Iran website – May 10, 2020)
An estimated 7 million child laborers in Iran are vulnerable to various social ailments. At least half of the child laborers in Iran are young girls. (The state-run Tasnim news agency – September 27, 2019)
The problem of child laborers is very serious in Iran. The Iranian regime Iran is a State Party to the Convention on the Rights of the Child (CRC) (1994), however, it does not abide by its obligations under this convention which ban child labor.
This problem has aggravated in recent years in step with growing poverty in Iran. Young girls work in the streets as peddlers or collect garbage. Sometimes, they are abused by municipality agents, and sometimes, they are attacked by thieves or rabid dogs.