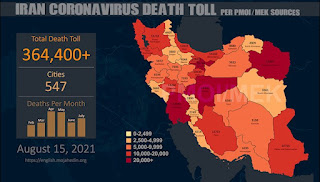 Over 360,400 people have died of the novel coronavirus in 547 cities across Iran, according to reports tallied daily by the Iranian opposition People's Mojahedin Organization of Iran (PMOI/MEK) as of Thursday, August 15. https://tinyurl.com/jrne8823 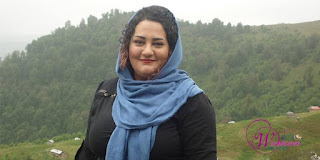 Political prisoner Atena Daemi is on hunger strike again to protest being deprived of calling home. The telephone lines of the Lakan Prison of Rasht are frequently cut off, preventing her from calling home and talking to her parents. None of the prison officials accounts for this problem. Atena’s father, Hossein Daemi, posted a tweet which said: “Because of lack of attendance to the frequent cut-offs of the telephone lines of the Lakan Prison of Rasht, and the officials’ failure to account for this problem, Atena Daemi has declared to the prison authorities that she would go on hunger strike in protest (beginning on August 12, 2021). She has also declared that she will continue her hunger strike until this problem is resolved.” Mr. Daemi also noted that he and his wife have contracted the Covid-19 because they had to travel to Rasht to visit Atena. Rasht is the capital of Gilan Province, one of the most infected provinces with a high death toll due to the Covid. https://tinyurl.com/36kc4t6t 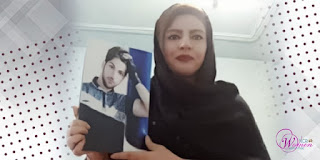 Farzaneh Ansarifar faces a fabricated case and trumped-up charges examined in the First Branch of the Revolutionary Court of Mahshahr. The brother of Ms. Ansarifar, Farzad, was killed during the November 2019 uprising. Security forces of Behbahan arrested Farzaneh Ansarifar during a peaceful protest on July 16, 2020. She spent nine days in detention in the Sepidar Prison of Ahvaz. The judicial authorities have kept her case open to intimidate and terrorize her. On the case fabricated against her, Ms. Ansarifar posted in her account: “The authorities did not send us written summons and the court did not convene. We had not committed any crime. They arrested me in a place far from the place of the protest. Every month, they summon me or send me a summon. Now, they have put into action the threat they made several days ago. They sent my case to the Revolutionary Court of Mahshahr to rule on a crime I have not committed. Is this justice?” In another part, she wrote: “They killed my brother, set fire to my house and car, and put me in jail for nine days in the Sepidar Prison of Ahvaz for the crime I had not committed.” Farzaneh Ansarifar is accused of “insulting the (supreme) leader,” “propaganda against the state,” “inciting public opinion,” and “interviewing with foreign media.” https://tinyurl.com/4uuxvw3u 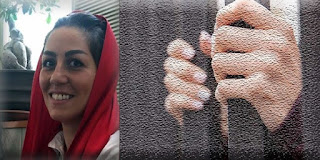 Prison authorities have deprived Mrs. Maryam Akbari Monfared of visitation by her three daughters, claiming they wanted to prevent the Coronavirus from spreading. Nevertheless, they allow new arrivals into the prison wards without keeping them for the necessary time in the quarantine. Six months after her violent exile to the Prison of Semnan, Maryam Akbari still does not have a telephone card. She can only call her family in the presence of a prison agent who frequently disconnects her calls, upsetting her and her family. Ironically, no legal authority accepts the responsibility of sending Maryam Akbari into exile to Semnan Prison.

In June 2010, the Revolutionary Court of Tehran handed down a 15-year prison sentence for Moharebeh on the alleged charge of “membership in the People’s Mojahedin Organization of Iran,” a charge which Mrs. Akbari has never accepted. On March 9, 2021, she was violently sent to exile from the women’s ward of Evin Prison to the Prison of Semnan where she endures more pressure and restrictions.