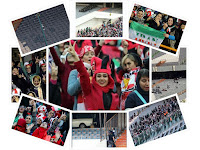 According to women committee of the Iranian resistance NCRI(National Council of Resistance of Iran), exactly one month after Sahar Khodayari lost her life in self immolation, limited numbers of Iranian women allowed into Tehran’s Azadi Stadium after 40 year ban, on Thursday, October 10, were shouting, “Blue girl, wish you were here!” Sahar Khodayari known as the #blue_girl set herself on fire for a 6 month prison sentence for entering the stadium. Despite the demand — and the size of the stadium, which remained largely empty — Iranian officials made little effort to increase the allotment for women. Another group of women were also allowed into Azadi stadium. Hundreds of female State Security forces stood guard to watch over the female spectators. A considerable number of plainclothes agents were also present among the female spectators. A closed circuit camera also kept all their movements under tight control. Couples were separated, and women were bused to the stands to prevent them from going to other places around the stadium.
During this match, a young woman who raised a banner that read: blue girl, your name is eternal, was arrested despite efforts by other women to save her.

Yasaman Aryani, one of the female political prisoners incarcerated in the women’s ward of Evin Prison, has been transferred to the IRGC-Intelligence ward 2A since October 5. She is serving her 16-year sentence.

- Two female political prisoners Atefeh Rangriz and Sepideh Qolian held a sit-in at the notorious Qarchak Prison in Varamin advocating for two common prisoners there, Soqra Eftekhari and Akram Bayrami. The two are kept in solitary confinement under harsh conditions. Ms. Rangriz and Ms. Qolian declared that they will go on hunger strike if their demand is not met.
- On Saturday, October 5, the 75-year-old mother of political prisoner Kamran Darvishi was battered as she went to visit him because she was carrying a hand-free radio with her.
- Faezeh Abdipour, a female Gonabadi Dervish, was summoned to the Evin Prosecutor’s Office for her final defense. She was arrested during the uprising in December 2017-January 2018. Ms. Abdipour was formerly sentenced to 12 years in prison, 74 lashes, two-year exile to Borazjan and two-year ban from social activities and leaving the country.
and in another development, the 6-year jail sentence and 74 lashes for student activist Sepideh Farhan was commuted to 2 years after she protested the court ruling.