Atefeh Rangriz, a graduate student of sociology and a labor activist, started a hunger strike in the notorious Qarchak Prison of Varamin on October 16, 2019, to protest her unjust treatment in prison. Atefeh Rangriz has been sentenced to 11 years and six months in prison and 74 lashes. On her first day of hunger strike she wrote an open letter and revealed her situation.
In part she wrote: I was arrested on May 1, 2019, during the International Labor Day gathering. After four days, I could be freed on a 30-million-toman bail, but my release was prevented. For 28 days, I was being transferred back and forth between Qarchak and Evin prisons and interrogated. Although I had repeatedly told them in my answers that my activities had been completely legal, and I could not understand any of their questions, I finally faced charges which were utterly fake and fabricated… I have repeatedly objected to the illegal proceeding of my case, including the rejection of my bail bond, and the authorities’ failure to observe the principle of separation of prisoners’ categories. I have also protested in various ways the handing down of unfair sentences. This is a summary of the unlawful situation I have been through over the past 5 months and 13 days. Outside the prison, my family did not receive any response for their inquiries, neither did I from inside… Therefore, I have made a weapon from my body to stand up to the injustices we have and continue to experience. I hereby announce that I am going on hunger strike to protest the five times illegal rejections of my bail bond, and also to protest the unfair sentences and my illegal detention in Qarchak Prison. I know it all too well that my life is not worth protecting for those who are playing with it. I have decided to endure this suffering to break the suffocating silence that is effectively killing our civil society and our righteous cries. Hence, I conclude this letter with two words that have echoed throughout the history of oppressed people, “Either death or freedom.”
Atefeh Rangriz, Qarchak Prison, October 16, 2019

22 school girls were poisoned and hospitalized after inhaling carbon monoxide gas in their classrooms in a school in Kargan Jadid village of Bostanabad, in East Azerbaijan Province in Iran. The heating system of Asiyeh girls’ school in Kargan Jadid Village started mal-functioning, leaking off carbon monoxide and poisoning the students, according to a report by the official IRNA news agency on Wednesday, October 16, 2019. They were taken to Bostanabad hospital by the Red Crescent emergency ambulances and other vehicles.

Amir Hooshangi, director of the Education Department in Bostanabad, announced, “The students will be transferred to another school until the problems in this educational unit are resolved.” (The official IRNA news agency – October 16, 2019) Iranian girl children are victims of non-standard systems and deficient school infrastructures, unsafe transportation, and irresponsible approach by the authorities. School children have been repeatedly poisoned due to unsafe and deficient heating systems.

In February 2018, Supervisor for Emergencies, Pir-Hossein Kolivand, announced that 23 high school girls in Mashhad had also been poisoned by carbon monoxide when the chimney of the classroom’s heater was blocked, giving off carbon monoxide into the classroom. (The state-run ROKNA news agency- January 21, 2018)

In December 2012, one of the most tragic incidents happened in an elementary girls’ school in Shinabad village, a subsidiary of Piranshahr in West Azerbaijan Province. One of the classes caught fire where 37 girls got burned. Two of them died, and the rest suffered serious injuries for the rest of their lives. The government took no practical measures, failing to offer proper support for the treatment of the girls.

The 36th branch of the Revision Court of Tehran Province approved and finalized one-year prison sentences for six female singers. Tehran Province’s Court handed down the sentences for the six female singers charged with unauthorized audiovisual activities, collaboration in making music and images, and airing them on anti-regime satellite networks. In May 2019, a female singer was prosecuted for solo singing during a tour of Abyaneh, a village in Isfahan Province. (The state-run Fararu website – May 21, 2019) In another event, Tehran’s Guidance Ministry Court summoned Matin Sotoudeh, a cinema, television and theater actress, on October 16, 2019, for the way she had dressed up during the screening ceremony of a movie.

Back in August, the commander of Tehran’s State Security Force, Hossein Ashtari, declared that posting pictures of people wearing dresses not complying with the official dress code is a breach of law. He added, “It doesn’t matter who is breaking the norm; whether an artist, an actress or a celebrity, all of them will be dealt with accordingly.” (The state-run ROKNA news agency- August 5, 2019)

Women have always been banned from solo singing under the mullahs’ rule and were targets of censorship. In the early years of Khomeini’s rule, female singers were literally forced to stop their activities and go home, and many had to leave the country. Many others were forgotten and left alone without being able to make ends meet. Only a small number of female singers that chose to tolerate the regime’s repressive censorship, were allowed to perform before a female audience.

Back in May, female musicians were banned from playing in a traditional music band supposed to perform in a charity concert at the auditorium of the Azad University of Qazvin. They were not allowed to even sit among the audience. (The state-run ILNA news agency – May 23, 2019)

The Tehran Supreme Court rejected the flogging and exile verdict for Salman Khodadadi, accused of raping a young woman, Zahra Navidpour. Following a suit filed by Zahra Navidpour, Tehran Province’s Criminal Court convicted Salman Khodadadi of adultery “without use of violence” and sentenced him to 99 lashes in addition to two years of internal exile and deprivation of holding elected or appointed positions. Khodadadi objected the verdict and his case was undertaken by one of the branches of the Tehran Supreme Court. While rejecting the charge of “rape,” the Supreme Court branch accepted the convict’s objection and did not uphold the preliminary ruling because Khodadadi suffers from diabetes and injects insulin. The case was turned back to the Criminal Court of Tehran to be re-examined. (The state-run Fararu website – October 15, 2019) Zahra Navidpour, 28, from the small city of Malekan in East Azerbaijan Province, was looking for a job after her father’s death, when she was offered a job in Tehran by Salman Khodadadi, the deputy of Malekan in the Iranian regime's parliament. Zahra was locked up, harassed and subsequently raped by Khodadadi at his office in Tehran. Then, she was threatened and warned against telling anybody about the incident. Zahra filed a suit against Khodadadi. She held audio recordings and other incriminating documents at hand, but due to the deputy’s collusions with the court, she faced an unfair trial and a presiding judge who was intent to incriminate her. In a verbal encounter in the parliament building, Khodadadi had threatened to kill Zahra and her family “overnight without anyone knowing.” In a letter to the judge presiding her case, she wrote that she had no security and that she needed to be protected. Finally, Zahra Navidpour was found dead at her mother’s home on January 6, 2019. It seemed that she had committed suicide. The coroner’s office was supposed to perform autopsy on Zahra Navidpour’s body to determine the reason for her suspicious death, but security forces stole and secretly buried her body in a village before autopsy. 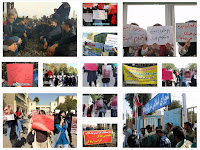 Tehran University students held a protest against Rouhani’s presence at Tehran University on Wednesday, October 16, 2019. They held their protest gathering in front of the university’s mosque. They also spoke out against heavy prison sentences issued for student activists and depriving them of continuing their education.