The Iranian regime's Ministry of Intelligence and Security (MOIS) has been preventing granting furlough to Kurdish political prisoner Zeinab Jalalian for medical treatment, despite her family’s depositing of a bail bond.
Mr. Ali Jalalian, Zeinab’s father, has been cited as saying that she is suffering from intestinal complications and heart problems. Jalalian family deposited one million tomans for her bail bond despite difficulties but the MOIS is handling the case of Zeinab Jalalian and refuses to accept the bail.
Mr. Jalalian said his daughter has been in jail for 12 years and their inquiries to get her released temporarily for medical treatment have gotten nowhere. Even in recent weeks, when Zeinab Jalalian’s brother passed away, they did not allow her to attend his funeral.
Denial of medical treatment to political prisoners is one of the most common methods the Iranian regime uses to bring double pressure on political prisoners.
In a call for urgent action on June 15, 2018, Amnesty International said Zeinab Jalalian is being subjected to torture by blocking her access to medical care.
Kurdish political prisoner Zeinab Jalalian was arrested in March 2008 in Kermanshah at the age of 25. She was first sentenced to death which was later commuted to life sentence on the charge of “enmity to God” and “membership in Kurdish parties.”
She has several medical conditions, including heart, intestinal, and kidney problems, as well as an oral thrush or Canadianism that has caused painful white bumps on her tongue and interferes with her ability to eat and swallow. She also suffered from a severe dental infection.
Zeinab Jalalian is at risk of losing her eyesight in prison as she is being denied surgery for a worsening eye condition called pterygium, which is impairing her vision and causing her severe discomfort.
The right side of her body is numb, the reason for which remains unknown, as she has not received any diagnostic tests.
Additionally, she is experiencing dips and spikes in her blood pressure, which the prison doctor has said is linked to the stress and psychological pressure she is under. 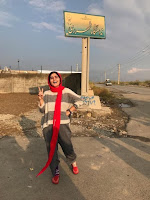 Political prisoner Sepideh Qolian went on hunger strike on Sunday, October 20, to protest increasing pressure brought on her family and relatives by intelligence organs. Her protest was also to the authorities’ mistreatment of inmates in Qarchak Prison. She demanded that a delegation from the Judiciary visit Qarchak to look into the abysmal conditions of inmates in this prison.
Sepideh Qolian was freed on bail on Saturday.

Civil rights activist Sepideh Qolian was arrested during the protests by workers of Haft Tappeh Sugarcane Factory last winter. She was later sentenced to 18 years in prison.
Her sister, Samaneh Qolian was arrested and detained on October 21, 2019, in Ahvaz, only a day after Sepideh went on hunger strike. Samaneh was released after one day of interrogations.
political prisoner Atefeh Rangriz ended her hunger strike in Qarchak Prison on Wednesday, October 23, 2019, after eight days.

on Wednesday, October 23, after eight days and was freed on bail on Sat.
Atefeh Rangriz is a master’s student of sociology and a labor activist arrested during the Labor Day protest in Tehran on May 1, 2019. 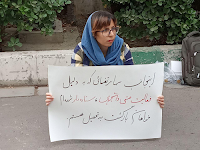 Also on Tuesday, October 22, 2019, students of Tehran University held a protest gathering declaring support for Soha Mortezaii, who has been holding a solo sit-in for ten days in front of the university’s library. Soha Mortezaii was arrested in January 2018 during the nationwide uprisings in Iran. She is demanding that the ban on continuing her education for a Ph.D. be lifted.

In her twitter account Ensiyeh Daemi posted that her family was banned from meeting her sister Atena in the prison’s visiting hall. Ensiyeh Daemi posted on October 20, 2019, “In the visiting hall, they stamped our hands. This is a routine we have to go through whenever we go for a visit. Then we went to the hall where we can meet in person. Suddenly, a guard brought a letter from the warden indicating that we could not meet in person, without mentioning any reasons. We were shocked. We asked why but did not get anywhere. So, we went for a cabin visit. Unaware of the ban, Atena had cooked lunch. Even Atena could not get an answer. We talked and we did not reach any conclusions as to why this ban had been imposed, except that Atena was a thorn in their eye.”
Political prisoner Atena Daemi, a children and civil rights activist, was arrested on December 21, 2014, for her peaceful activities. She was tried on March 14, 2015, and charged among others with “propaganda against the state”, “association and collusion against national security”, and “insulting Khamenei.” Atena was sentenced to 14 years in prison in a court presided by Sharia Judge Mohammad Moghiseh, a member of the Death Commissions in the 1988 massacre of 30,000 political prisoners. Atena’s sentence was subsequently commuted to seven years which she has been serving since 2016. Just recently, she was sentenced to another 3 years and seven months in prison for protesting execution of Kurdish activists.

******
On October 15, 2019, Jaka Ismailpour, was arrested along with her husband and two other men, in Bukan, in West Azerbaijan Province in Iran. She was transferred to the city of Urmia by security forces.

A Christian woman, Rokhsareh (Mahrokh) Ghanbari, 61, reported in to Kachouii Prison in Karaj to serve her one year in prison.

Women’s rights activist and news photographer, Aliyeh Motallebzadeh, was sentenced to three years in prison by the revision court. Aliyeh Motallebzadeh is the Vice President of the Association for the Defense of the Press.
Motallebzadeh was arrested by agents of the Ministry of Intelligence on November 26, 2016, and held in solitary confinement in ward 209 of Evin Prison where she was interrogated for 25 days.
Tehran’s Revolutionary Court issued a three-year prison sentence for Aliyeh Motallebzadeh, on the charge of association and collusion to commit crimes against national security.

Girl children sifting through garbage to earn a meager living are victims of absolute poverty in Iran. The “Garbage Mafia” in the capital Tehran takes advantage of them to make fortunes.
Addressing this issue, Hossein Maghsoudi, member of the Iranian regime parliament, said, “Garbage gangs use derelict children and women, and addicts to collect garbage. Today, these children are victims of this ‘dirty gold.’ Currently, there are some 15,000 scavengers in the capital, 5,000 of whom are children. 40% of them are 10 to 15 years old and their families’ only breadwinners.” (The state-run ICANA news agency – October 18, 2019)
State-run media have written about the girl children sifting through garbage saying they are more vulnerable to diseases than boys. Their long hairs are full of lice and they have not enough water to wash their hair. The little water they use is contaminated. (The state-run ICANA news agency – October 20, 2019)
Iron deficiency, lice, skin and ear infections, severe malnutrition, hepatitis A and AIDS are just some of the diseases child laborers are affected with.
Elham Fakhari, a member of Tehran’s City Council, had earlier said, “Most of these children have diseases, but their illnesses are not a priority among their problems, because most of them are sexually abused.” (The state-run ILNA news agency – June 12, 2019)
A garbage dump woman called Zainab says “bullying and rape are the main problems female workers in the garbage dump have to deal with.”
A social activist also said, “Children sifting through garbage work an average of more than 10 hours a day. There were kids who worked 20 hours a day. This is kind of a modern slavery.” (The state-run Tahlil-e Iran website- January 8, 2018)
There are children from 4 to 12 years old among the scavengers. Living in sheds made of junks and full of vermin, lack of bathrooms and showers, and contagious diseases are just some of the problems these children have to deal with.