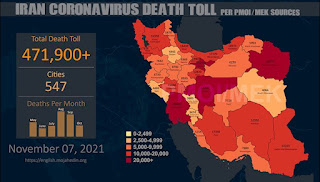 Over 471,900 people have died of the novel coronavirus in 547 cities across Iran, according to reports tallied daily by the Iranian opposition People's Mojahedin Organization of Iran (PMOI/MEK) as of Sunday Nov. 7, 2021. 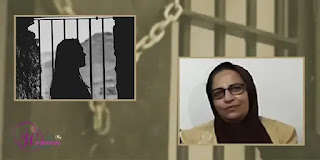 Political prisoner Zahra Safaei is in critical conditions in the notorious Qarchak Prison. After having a heart attack and undergoing heart surgery, she cannot endure prison conditions. On August 31, 2021, Zahra Safaei had a heart stroke. The Qarchak Prison authorities hindered her transfer to a civic hospital where she later underwent a heart surgery. Zahra Safaei remains in a cell alongside ordinary inmates in violation of the principle of the separation of crimes.  Enticed by the prison’s warden, dangerous criminals in Qarchak threatened to kill Zahra Safaei several times. Political prisoner Somayyeh Qoraishi has been detained in the women’s ward of the Central Prison of Urmia for a year. During her time in detention, she had a divorce. She has a sick child, but prison authorities have refused to release or grant her medical leave. https://tinyurl.com/ac633nta 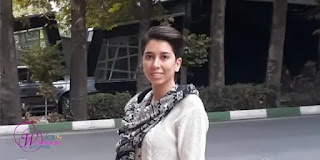 Saba Kord Afshari returned to Qarchak Prison on Thursday, November 4, 2021, before completing her medical treatment. Saba suffers in the stomach. Prison authorities rejected her request to extend her leave although she has completed her medical treatment. Saba Kord Afshari had been sent on medical leave on October 23, 2021. Political prisoner Saba Kord Afshari has been under various forms of psychological stress and physical pressure in Qarchak Prison. An ordinary prisoner recently threatened to kill Saba. A source in Qarchak Prison said two ordinary prisoners had been relocated from Ward 6 after inmates’ protest.  https://tinyurl.com/n6axwcrx 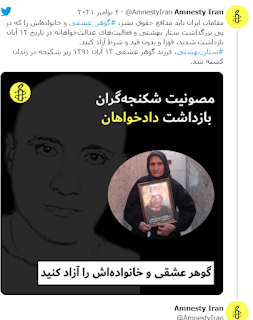 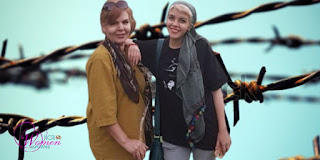 Yasaman Aryani and her mother, Monireh Arabshahi, are deprived of receiving prison leave. The mother and daughter rights activists are imprisoned for their opposition to the Iranian regime’s policy of mandatory Hijab. Farzad Aryani, Yasaman’s father, posted an audio recording on the social media, in which he said, “Why the rights of prisoners, including my wife and daughter, are not observed?” “My wife and daughter have not embezzled any money, nor have they committed murder,” added Farzad Aryani. “They spoke out in the best possible form by presenting flowers [to women on the International Women’s Day.] They must not be deprived of their right to have prison leave.” https://tinyurl.com/2h4x5ed6
Posted by Radio Irava at 10:43 a.m.