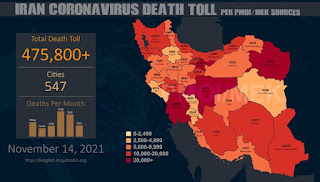 Over 475,800 people have died of the novel coronavirus in 547 cities across Iran, according to reports tallied daily by the Iranian opposition People's Mojahedin Organization of Iran (PMOI/MEK) as of Sunday Nov. 14, 2021. 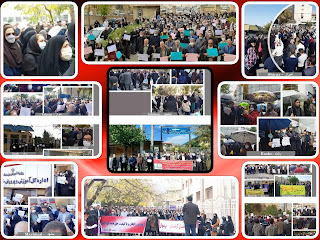 On Thursday, November 11, Iran, witnessed the largest nationwide protests of teachers in 53 cities across the country. The protests of Iranian teachers were against small salaries, delirious high prices, intolerable living conditions, and the officials’ ignorance of their rightful demands. As always, plainclothes agents and the State Security Force tried to prevent these protests, to no avail. In the capital Tehran, the State Security Force initially used loud speakers to disperse the crowd. Subsequently, they attacked the protesters who were holding the photos of the martyrs of the November 2019 uprising. The SSF tore up the pictures. They prevented filming of the gathering and arrested a group of protesting teachers. https://tinyurl.com/55czfrab 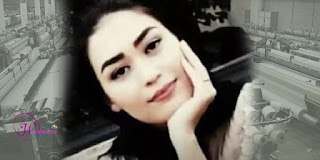 A female textile worker lost her life when a spinning machine pulled in her head. Marzieh Taherian was working with a ring-spinning machine in the Kavir Semnan Textile Factory when this horrendous accident happened on November 6, 2021. According to Ilna state News agency Nov. 7, Marzieh Taherian was only 21 years old. Her fellow workers said initially her head covering was stuck in the machine, but immediately afterwards her head was also pulled in. The factory is located in the Industrial Township of Semnan, in east central Iran. https://tinyurl.com/6cvm2ups

The Penal Court of Tehran province sentenced a young woman to stoning in Iran. Sareh, 33, got married in 2013, and has a 4-year-old child. Her father-in-law accused her of illicit relations out of marriage and demanded maximum punishment for her. The case of Sareh and Maysam, the man who was her friend, was sent to Branch 11 of the Penal Court of Tehran Province. The young woman denied the charge and said Maysam was a simple friend. Maysam also rejected the charge of illicit relations. Sareh and Maysam rejected the stoning verdict and appealed. Branch 26 of the Supreme Court examined the case and ultimately upheld the execution of the man and woman. https://tinyurl.com/ut8ductc